The Road to State: Elena Bruckner 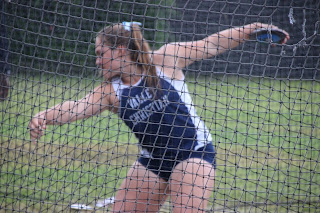 San Jose, CA - The first time Elena Bruckner picked up a shot put was 5th grade. Little did they know that it was the beginning of what would turn out to be one of the most storied high school careers in U.S. history.

“They needed people to throw the shot put and I thought to myself, ‘I'm strong, I'm competitive, I may as well try it out,’" Bruckner said reflecting on her first try at shot put.

It has been quite the journey for Elena Bruckner. She has lived in Washington and then Wisconsin before landing in the Bay Area. A dual sport athlete, Bruckner plays volleyball in the fall and competes in track in the spring. She was a key member of the Valley Christian volleyball team that won the DIII State Championship this year and is the only athlete in school history to win state titles in two sports.

And she is pretty good at the other events too. As a freshman she jumped 4-8 in the high jump, making the team’s all-time list. She has triple jumped 31+ and even ran a leg on a 4 x 100 relay this year. When she was younger she was a competitive rock climber. Oh ya, and she sings the national anthem at sporting events too.

Through it all, the national leader, state and section record holder, 5-time CCS Champion remains humble. You can find her at dual meets marking for the frosh-soph and JV competitors and cleaning up after the meet.

It is this spirit, compassion and love for others that drives her. It is doing things for others that pushes her to be the best. Not just on the track but as a person. This year she has set up to receive donations of old track medals to give to patients at Children’s Hospitals.

[Click here to find out how to donate old medals!]

The records and accolades have not come easy. Bruckner is usually the last one off the track, something that has been part of her daily routine since her freshman year. That first season she finished with a best of 36-2 in the shot put and 91-3 in the discus. Good, but hardly indicative of what was to come. That year she finished third in the WCAL shot put but failed to advance to the section championship. It was a defining moment she used to fuel her drive to be the best.

The start of Bruckner’s sophomore season began with a personal best in the shot put and the push to break 40 feet was on. She got it April 9, 2014 at the Saint Francis dual meet and the flood gates opened. She went on to throw 43 feet at the Arcadia Invitational and then 46 feet at CCS Top 8. That season she went on to win the CCS Championship in both the shot put and the discus. Perhaps the biggest moment came at the State Meet that year. Her fourth place podium finish put her on the radar as one of the most improved in the state and an early favorite for the state title next year.

She didn't slow down any the next year. Her junior year was spectacular, finishing #1 in the nation in both the shot put and the discus. She improved 7 feet in the shot put, over 50 feet in the discus. But beyond her state title and CCS records it wasn’t the highlight. That came hoisting the team trophy as the girls track team finished second place at the state championship in the team competition.

“By far my most favorite memory was when Ronna and I got to stand on the podium to accept our second place team trophy,” she said reflecting back on last season. To see how many girls the first place team had compared to our two competitors was mind blowing.”

Now a senior she has not taken anything for granted but looks to make her mark on California. From the first day of practice the senior set the tone. Like the kid who is out playing until too dark continue Bruckner works until she is told to go home.

Bruckner has already left her mark setting the state record in the shot put with a throw of 54-7 at the WCAL Finals. She also has a personal best 186-10 in the discus, the #4 mark all-time in U.S. history. But she still has work to do.

Elena Bruckner competes today at the State Championship. She begins with the discus at 4 pm, Shot Put at 6:30 pm. 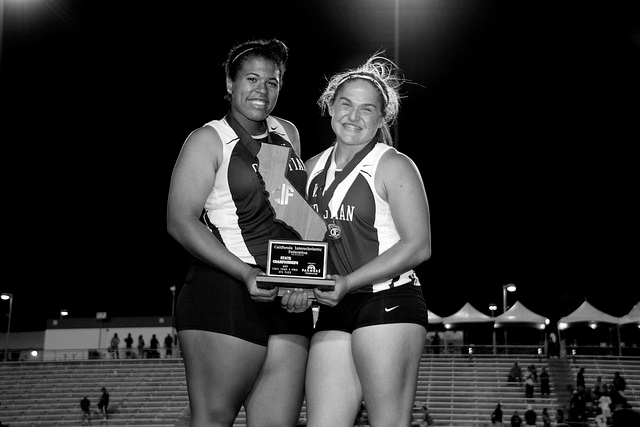 Posted by Warrior Nation at 2:00 PM