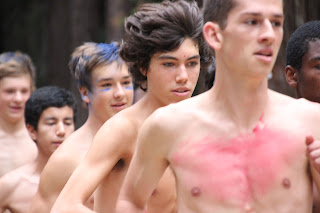 Santa Cruz, CA - The Warriors kicked off the cross country season for the seventh consecutive year with a team time trial held at UCSC. Dubbed the "Watermelon Run" for the featured fruit of the post race feast, the course carves 2.1 miles through the rolling hills and redwood forest on the UCSC campus.

Joe Renati was the team's top finisher running the second fastest time in event history. His time of 12:03 is also the fastest a sophomore has ever ran. A very close pack that saw six Warriors finish within 35 seconds resulted in a new team time record. The top six boys all dipped under the 12:40 mark, something only four had done it in the six previous years combined!

It was a successful day across the board as nearly every runner ran a personal best on the day. Other notable performances came from Dean DeMoss (13:04) and his younger brother Jake (13:27) who both move into the 20 all-time performances respectively. Sophomore Mitchel Rohr (13:43) ran strong despite heavy cramping and freshman Patrick Mahoney (13:51) had a strong debut also dipping under 14 minutes. Big jumps came from Nathan Baldry and Patrick McCoy both running personal bests.

The Lady Warriors also had a strong performances with lots pf personal bests of their own. Kiko Li led the way for the girls finishing in 16:00. Her time is #14 all-time. Freshman Mackenzie Thomas (16:02) was runner-up just seconds behind with a debut that places her #15 all-time! Camille Reed was just off of her best with a strong run of 16:13 while Vanessa Giacalone knocked off about 30 seconds from her best finishing in 16:59. Sophia Patterson had a huge jump over last year improving 4 minutes and 35 seconds over her time from last year!

Other strong performances came from Freshman Ashley Clayton (17:54) and Kayla Nanez (17:57), who add depth to a young Warrior squad. Another big personal best came from Grace Cardona who improved 80 seconds over her time from a year ago!