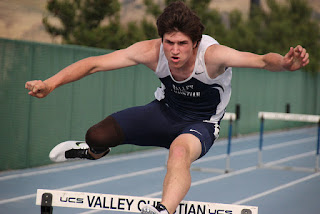 San Jose, CA - The varsity boys defeated Riordan 75-55 marking their fourth win in the past five weeks. It has been one of the most successful seasons on record, not just in dual meet wins but in the record books. In total 25 additions have been made to the boys’s all-time list so far, two of them school records.

Yet the most exciting stat for this young team: only graduate six seniors.

“It has been a fantastic season,” Coach Small said. “The boys started the year winning the Willow Glen Invitational and end with the most dual meet wins since Valley joined the WCAL.”

But there is still work to do. The Warriors head to the WCAL Championship Saturday.

It has been an exciting season for sophomore Charlie Bostic who is the top ranked underclassman in the section. Bostic ran a personal best for the second consecutive week winning the100 meters in a personal best 11.11. He also came back and won the 200 in 22.94.

It was an impressive showing in the boys mile as four Warriors ran 4:43 or faster. Nedu Ndili was the top finisher running a season best 4:34. He was followed by Joe Renati (4:42), Cameron Lockard (4:43) and Sam Cuevas (4:43). All earn recognition on the team’s all-time list.

The Warriors compete in the WCAL Trials Saturday May, 7 at Saint Francis High School. Both running and field events start a 9 am.

Posted by Warrior Nation at 6:17 PM