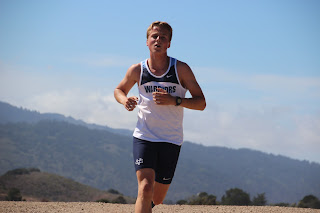 San Jose, CA- The Warriors traveled to Crystal Springs Friday to participate in pre-season action scrimmaging Serra, Westmoor, and Mercy Burlingame. It was a solid showing for the early season, the boys fielding just five varsity runners finished the day with the third fastest team time in school history (88:06); girls set the standard for future teams running their debut on the 3k course.

Joe Renati led the way once again running 16:56 on the windy day finishing fourth. His time is an improvement of one minute and fifty seconds over last season, he moves to #7 all-time. Justin Baraona also moves up the list with a personal best of 17:22, bettering his mark by nearly twenty seconds from a year ago. New comer Mitchell Rohr paced 17:40 in his debut on the course, Cameron Lockard was just 10 seconds off his best from last season running 17:47 and Sam Cuevas rounded out the varsity team with a personal best of 18:21.

The girls team ran a shortened course of 1.95 miles starting at the traditional one mile mark of the high school course. Brianna Becerra had a strong push in the last 1/2 mile switchbacks to move her to second place over-all and top finisher for the lady Warriors. Kiko Li (13:48) and Camille Reed (13:58) started strong and set the pace most of the way both dipping under the 14 minute mark. Sophia Paterson and Hannah Theaker rounded out the top five both running 14:25. 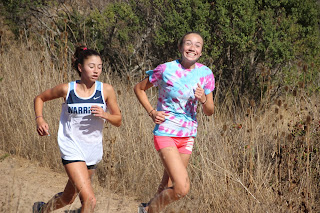 Freshman Mackenzie Thomas was next across the line running a strong debut of 14:28 and Vanessa Giacalone rounded out top 7 fishing in 14:39. Freshman Kayla Nanez and Ashley Clayton add depth to the young Warrior team finishing under the 16 minute mark, as did Maggie Theaker and Sandyha Bellary.

The Warriors officially open their season at the Stevenson Invitational at Pebble Beach, Saturday, September 12.