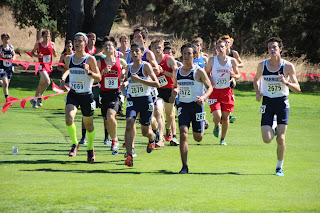 Stanford, CA - Over 3,400 athletes in fourteen races took over the Stanford Golf Course Saturday, turning fairways into finishing straights. It was a strong day of racing for the Warriors that saw the boys finish 10th in the Division III team race. Six runners finished 17:43 or better on the day, shattering the school record for team time by more than 5 minutes, running a combined 87:02.

Nedu Ndili was the top finisher for the Warriors running a school record 16:56 for the 5k course. Joe Renati was also under the previous record running 17:05 on the day.

Three of the top four ranked teams in CCS Division III were in the race, all finished within nine points of one another. Aptos, currently ranked #2 in CCS for DIII finished in eighth (323), Riordan, ranked #4, in ninth (328) and #3 ranked Valley Christian in tenth (332).

Emphasizing running as a team the Warriors packed up and worked together over the rolling 3.1 mile course. Ndili and Renati broke off together clicking off 5:30 miles. A pack of four was not far behind as Sam Cuevas (17:37), Mitchell Rohr (17:40), Justin Barona (17:41) and Cameron Lockard (17:43) all finished within six seconds of each other averaging a pace of 5:40 per mile. 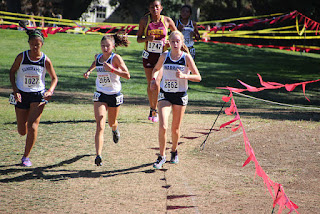 Addressing the team before the meet Coach Hamilton laid out the goal of the race for the team, "We have nothing to lose. We are running for each other and to grow as a team. That's it. That's all."

"This isn't finals. This is another opportunity to grow as a team and prepare for when it counts."

Kiko Li and Sophia Patterson led the Lady Warriors finishing the 5k course in 21:35 and 21:40, respectably. Both earn recognition on the team's all-time list running the #11 and #12 fastest times in school history. Working as a team, the pack of Brianna Becerra (22:36), Mackenzie Thomas (22:37) and Hannah Theaker (22:37) rounded out the scoring team. Working through the field after a conservative start the trio finished the 5k run averaging 7:17 pace. Also running for the Lady Warriors, Nicole Favre got the rust off in her first race of the season finishing in 23:29. The girls team finished 18th in the team competition.

The Warriors will next compete at the Baylands in Sunnyvale for WCAL #1 on October 1.

Posted by Warrior Nation at 6:29 PM