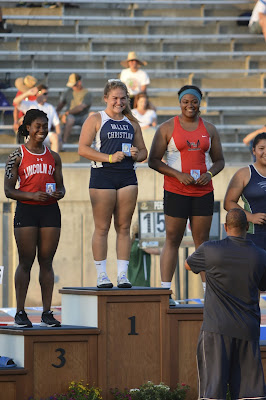 The 5-foot-6 senior won the shot put with an throw of 49 feet, 9.75 inches at the state championship meet this past season. Bruckner also finished second in the discus, and won both the shot put and discus at the Arcadia Invitational and the Texas Relays. She set a state record of 54-7 in the shot put, which ranked as the nation’s No. 2 performance among prep competitors in 2016 at the time of her selection. Her season-best throw of 186-10 in the discus ranked No. 1 nationally this season, and ranks her fourth in U.S. high school history.

Bruckner has maintained a 4.13 GPA in the classroom. A devoted member of her church community and a talented singer, she organized a medal drive to collect sports awards from championship athletes and redistribute them to hospitalized children.

“Statistically, Elena is one of the best combo throwers in the history of prep track and field, but she’s never been satisfied, always looking to get better,” said Valley Christian coach Josh Small. “She’s a gifted athlete, but also one who has matched that talent with an incredible work ethic.”

Bruckner has signed a National Letter of Intent to compete in track and field on scholarship at the University of Texas this fall.

The Gatorade Player of the Year program annually recognizes one winner in the District of Columbia and each of the 50 states that sanction high school football, girls volleyball, boys and girls cross country, boys and girls basketball, boys and girls soccer, baseball, softball, and boys and girls track & field, and awards one National Player of the Year in each sport. The selection process is administered by the Gatorade high school sports leadership team in partnership with USA TODAY High School Sports, which work with top sport-specific experts and a media advisory board of accomplished, veteran prep sports journalists to determine the state winners in each sport.