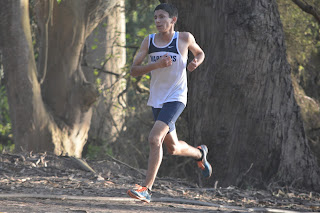 San Francisco, CA - It was a record breaking day for the Valley Christian Cross Country team as the Warriors traveled to Golden Gate Park for the second WCAL meet of the season. Both the boys individual and girls team records fell. Sam Cuevas lowered the boys team record to 15:59.2 while the girls varsity team bettered the previous team time record by 2 minutes and 36 seconds.


Varsity boys had a stellar day: Sam Cuevas finished tenth over-all in a team record 15:59.2 for the 3-mile course. Cameron Lockard ran nearly 20 seconds faster than his previous best finishing in 16:55 and Wesley Deffenbaugh cracked the 17 minute mark for the first time this season finishing in 16:57.

Joe Renati ran in his first race since the Watermelon run, recovering from hernia surgery. His mark of 17:37 in the JV race is off just one week of running. Ben Buckman finshed in 18:34. Top freshman was Jonathan Pappas who finished in 18:25.

The record breaking performance for the varsity girls was fueled by a slew of personal bests. Jordan Hahn and Mackenzie Thomas led the charge finishing just over a second apart in the ninth and tenth positions respectively. Their time of 19:24 and 19:26 is #2 and #3 on the team's all-time list. Sophia Patterson moves to #6 all-time, officially dipping under the 20 minute mark for the first time finshing in 19:53, an 80 second improvement over last year. Katelyn Stone was in a groove from the beginning and had her best finish this season running 20:04 for the 3-mile course. 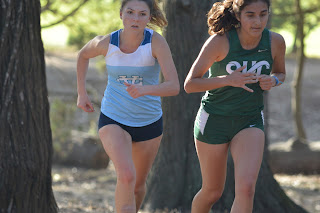 Kayla Nanez improved nearly 45 seconds over last season to wrap up scoring with a time of 20:35. Hannah Theaker finished just behind in 20:37, a 58 second improvement from her time a year ago.

Lauren Cicisly led the JV girls with a personal best 21:53. Camille Reed continues her comeback running pain free for the first time in over a year. She finished in 22:20. Reed's personal best,  20:03 run her freshman year, is #7 on the team's all-time list.

Frosh-Soph Girls had four finish in the top 13 resulting in a third place team finish. Alexis McMahon led the charge with a ninth place finish in 22:08. Kailina McClendon was tenth in 22:26, Ashley Clayton twelth in 22:36 and Christina Bruckner 13th in 22:38. Maylene Aguilar wrapped up the team scoring finishing in a personal best 23:46. 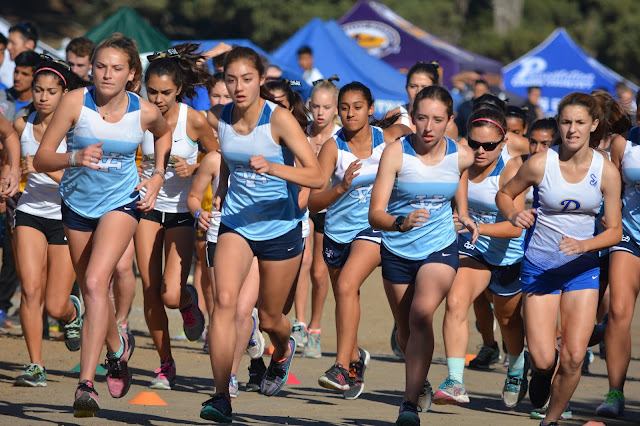 Posted by Warrior Nation at 7:02 PM