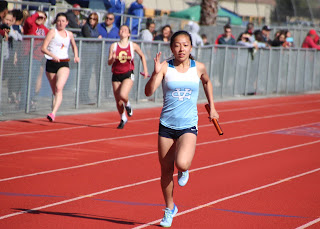 The Warriors throws crew was outstanding taking home wins in both the girls and boys discus. Anna Maumalanga showed her personal best throw of 124-4 in Wednesday's dual was no fluke, winning the event with a mark of 122-8. Max Moore also took the win with a mark of 139-0, just off his season best.

Camille Johnson is just one week into the track & field season after a deep post-season run by the girls basketball team and finished fifth in the shot put with a mark of 32-3. Johnson is the school record holder and all-American javelin thrower from last year's Junior Olympics but is her first attempt at Shot Put. Elizabeth He matched her breakthrough performance Wednesday once again throwing 31-1, finishing seventh.

Outstanding results came in the sprints as well. Nick Trofort took second in the 100 meters with a personal best 11.23. Three Warriors placed in the top five of the Frosh-Soph boys 100 meters all running personal bests: Freshman Deven Vanderbilt took the win in 11.69, D'Von Lang was second in 11.72 and Coleman Kyles finished in 11.86 for fifth.

In the girls sprints freshman Nina Berry finished fourth over-all in 13.25. She was also part of the all freshman team of Fallon Dexheimer, Nina Barry, Emily Hidalgo & Amber Lao ran a season best 52.48 in the 4 x 100 meter relay. 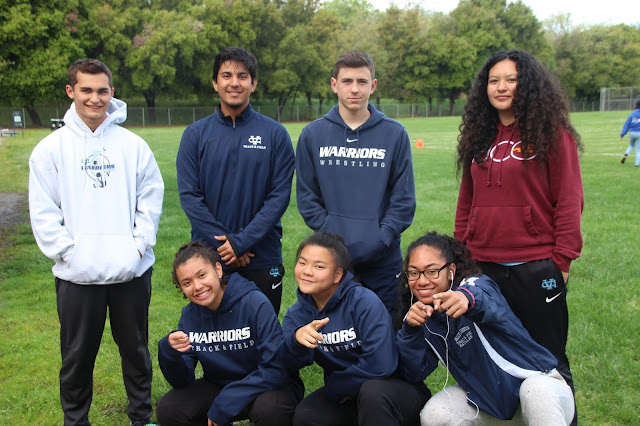 The Warriors throws crew had an outstanding day, taking home wins in both the boys and girls discus.
Posted by Warrior Nation at 8:59 AM