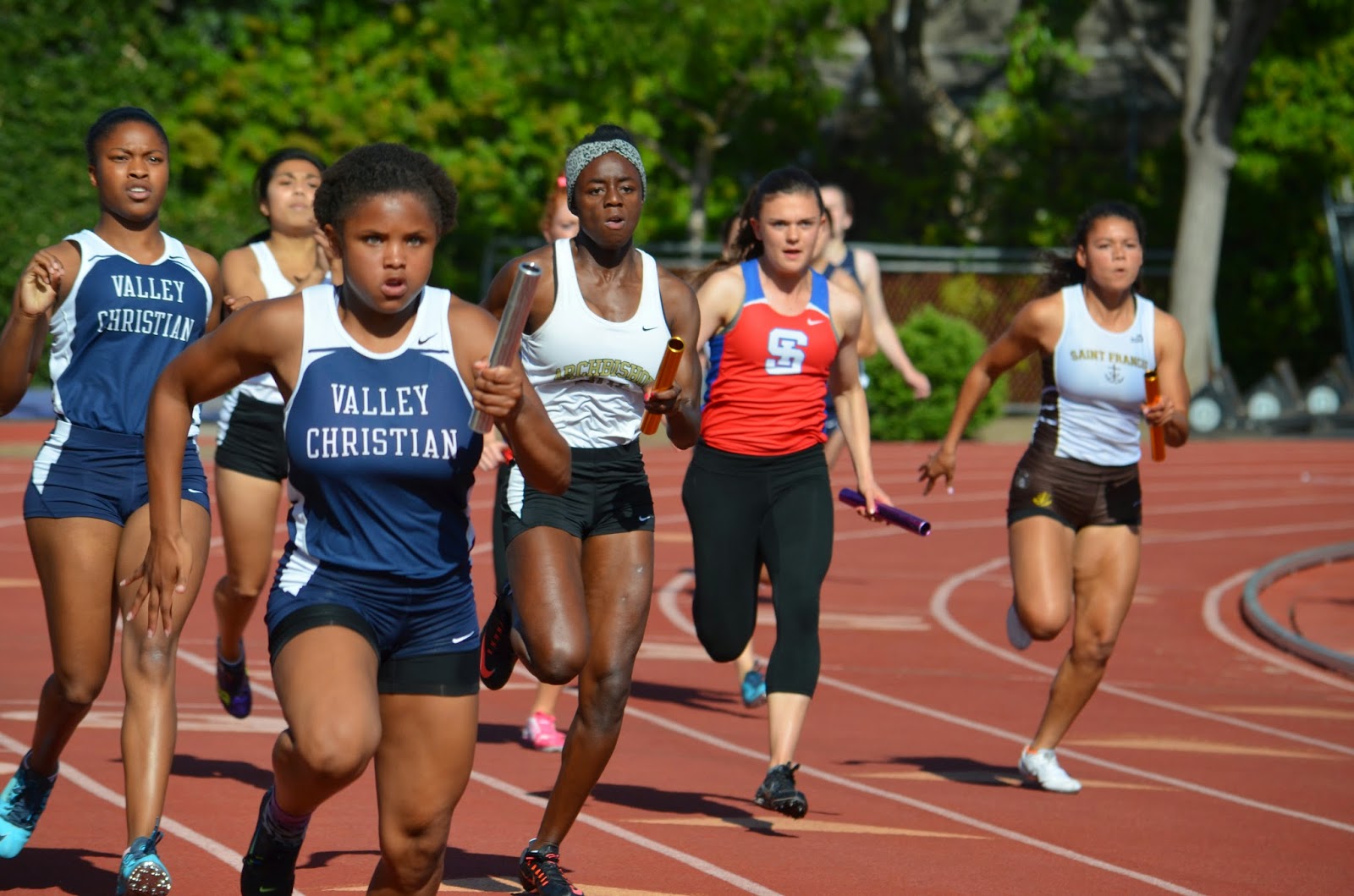 Mountain View, CA – The Lady Warriors were dominant in this year’s WCAL Finals posting five individual champions and remained in the hunt for the league title throughout the evening.  It is the kind of big meet performance they have had throughout the year: They won the Avis Kelley Invitational in late March, a meet featuring over 30 teams; they also finished runner up in the team standings at the CCS Top 8 Invitational in April, a prestigious meet many consider an early preview of the CCS Championship.   But league is another beast entirely with CCS qualifying on the line.  The Warriors battled from start to finish ending the day third in the team standings.

“It was the kind of meet you hope for rather than expect,” Coach Small said.  “Everyone went out and really battled today.  It was a good day for us.”

Shelby Smallwood has been consistent throughout her years at Valley Christian. Winning two WCAL titles her freshman year she has since qualified for two State Championships, sits #3 all-time for the Warriors in the 100 meters and has been the cornerstone for the relays since her freshman year.  A focused and driven student in the classroom she brought that intensity to the track and she was clutch once again in the 4 x 100 meter relay.  Setting the stage for the rest of the evening, the team finished third in a photo finish in a CCS qualifying time.  Smallwood, along with Taylor Johnson, Lydia Sum and Sonjali Padalakar finished in 49.34, a time that now ranks them seventh all-time in school history. That momentum was carried into the Junior Varsity division whose relay comprised of three freshman: Kiko Li, Tiffani Johnson, Allison Cong and sophomore Sydney Clark.  In another spectacular finish the team finished in a season best 53.43

Smallwood continued to shine throughout the meet winning her third WCAL title taking the 100 meters by just 0.01 to win in 12.54. Taylor Johnson also had a stellar run finishing fifth in a personal best 12.79.  Her time moves her to ninth all-time for the Warriors.

The field events continue to be a strong point for the Warriors.  It was a 1-2 finish for Elena Bruckner and Ronna Stone in both the shot put and discus scoring a collective 36 points.  Bruckner won the shot put with a mark of 44-11 setting a new WCAL meet record; Stone just behind finished with a personal best 41-10.  In the discus it was Stone’s winning throw of 128-8 that outdistanced the competition by more than 10 feet.  Bruckner was second in 115-6.

Just as impressive was Taylor Johnson and Elaine Ma in the long jump.  Finishing second and third the duo added 14 points to the team score.  Also finishing on the podium in the field events was Sydney Clark in the junior varsity triple jump where she surpassed the 30-foot barrier for the first time with a personal best 30-4.5! 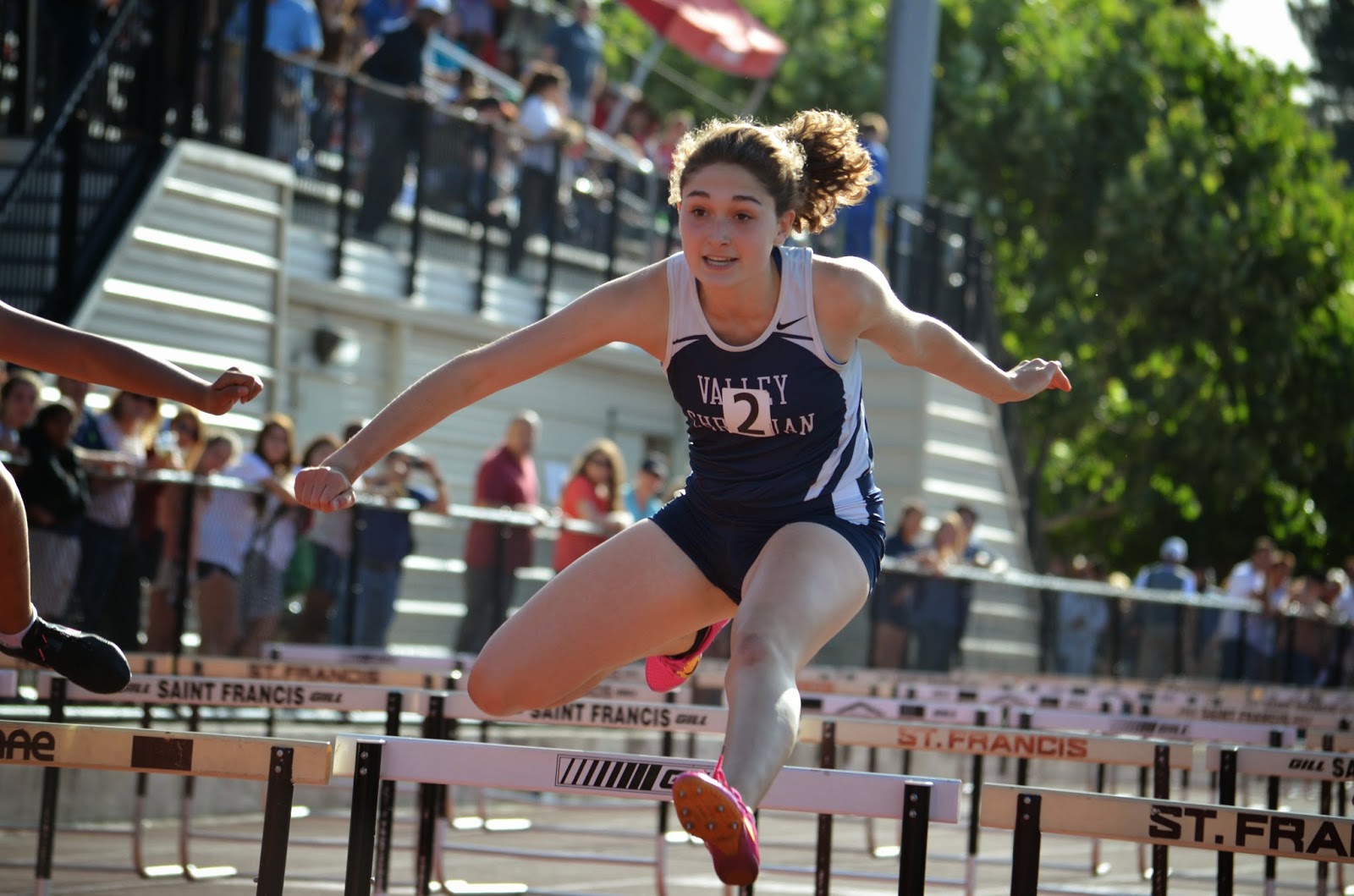 Ending the evening was an impressive showing for both the varsity and junior varsity 4x400 meters.  While varsity secured their third place finish in the team standings with their finish it was the junior varsity girls locked in an exciting battle that resulted in a season best.  Kiko Li started strong with a 68 second split that was followed up by Allison Cong and Nicole Favre split 66 second legs.  Caitlyn Rowland was impressive in the anchor splitting 64 as the team finished in 4:26.17.