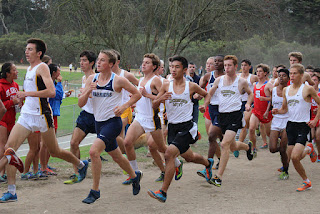 San Francisco, CA - For the second time in five days the boys cross country team have had a statement race making it clear their intention to contend for the section title and a state qualifying position. The Warriors ran the fastest ever in school history Thursday, running a collective 84:12 for three miles, an average of just 16:51 for the scoring runners. Four boys ran in the 16's, all surpassing the previous school record for the 3.0 mile course.

The Girls were also stellar on the day running a 103:44 team time, the second fastest in school history. Freshman Mackenzie Thomas had a breakthrough performance running 19:52, her first run under 20 minutes. Thomas took the race out aggressively crossing two miles in 12:50 a respectable time in itself. The remaining scorers all packed together at the two mile mark in 13:42 or faster.

Brianna Becerra led the charge of the chase pack passing two miles in 13:25. She finished in 20:30, a time over two minutes faster than she ran here a year ago! Nicole Favre is back to full strength running a personal best 20:50. Sophia Patterson also smashed her personal best running 21:13, exactly one minute faster than last year. Freshman Kayla Nanez tightened up the last mile but continues to be a huge impact runner for the varsity team running 21:17. Vanessa Giacalone rounded out the varsity team running 21:46. 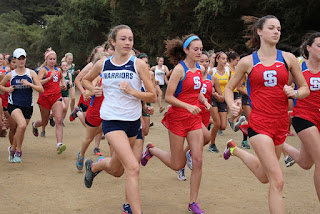 Hannah Theaker placed 9th in the Girls JV race running a huge personal best of 21:35, a 68 second improvement of last year's race. Freshman Ashley Clayton was superb as well running 22:16 and was followed by Maggie Theaker who also had a breakthrough race with her first run under 23 minutes. Her time of 22:54 is an improvement of 1:21 over last year. Sanhya Bellary finally had the race she has been looking for running 23:13.

In the boys Freshman race Jake DeMoss finished 13th in a time of 18:13.

"I thought our runners did a great job," Coach Hamilton said about the race. "They worked together, ran well and we had lots of personal bests today to prove it."

The Warriors will next compete in the WCAL Championship November 4 at Crystal Springs. 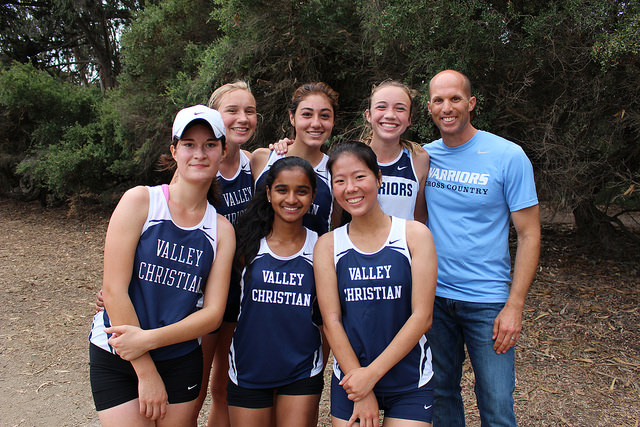 Junior Varsity girls had a stellar day as all six runners ended with a personal best!

Posted by Warrior Nation at 3:00 PM