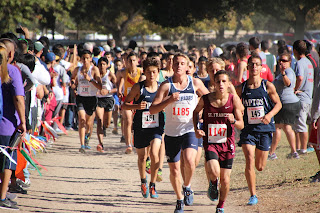 Salinas, CA - Team records fell at the the 2015 Chieftain Invitational, Saturday as the boys downed the old record by more than two minutes. The Lady Warriors were also impressive as the freshmen and sophomores finished as the second place team in their division.

Hot weather returned over the weekend leaving the varsity boys finishing in 91 degree temperatures which took its toll on the runners and race times alike. Despite the warm conditions the boys team cruised to a new school record for combined team time as the top 5 runners finished in 88:52.

Leading the way with the fastest time of the day was sophomore Joe Renati. Competing in the Frosh-Soph division earlier in the day, Renati took advantage of the cooler conditions to finish the 3 mile course in 17:03. Renati controlled the race the majority of the way. Taking the lead from the gun he did not surrender it until the final sprint, in which he ended third.

The varsity runners got the brunt of the heat with a 12:30 pm start. A physical and crowded fast start left the Warriors mid-pack in the early stages. In this kind of race it is imperative to move up and pass when the pace settles. With the trail narrowing even further just before the mile mark the team went to work moving up steadily through the pack. Through the first half of the hills the team was separated by just seconds and continued to stay in contact through two miles. Nedu Ndili set the pace for the team through much of the race but at about 2.8 miles the heat took its toll and he was holding on to just finish. Mitchell Rohr had a strong finish kicking in at 17:43. Ndili came in shortly after in 17:51. 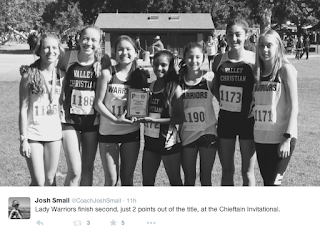 The youthful girls team took advantage of the 9 am start for the Freshman and Sophomore division, resulting in a second place finish in the team competition, just 2 points behind winner Scotts Valley. Camille Reed led the way finishing in 21:25 in seventh place, freshman Mackenzie Thomas was eleventh in 21:47. Sophia Patterson finished in 22:24 in fifteenth, a remarkable improvement of 4 minutes and 20 seconds over her race on this course a year ago.

Hannah Theaker also continues to show stellar improvement over last season running 22:44. Brianna Becerra had a strong start running top 5 with Reed through the first half of the race but cramping hamstrings caused a discomforting last mile. Still Becerra managed to finish in 22:48, a time nearly 30 seconds faster than the year prior. Running their debut for the Toro Park course and rounding out the frosh-soph team was Ashley Clayton (23:30) and Sanhya Bellary (24:44). Also running on the day was Vanessa Giacalone (25:33) in the varsity race and Maggie Theaker (25:11) in the junior varsity race.

The varsity team will compete next Saturday, September 26 at the Stanford Invitational.