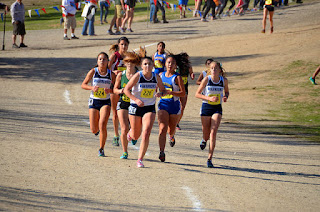 San Jose, CA - You don’t need to look very far into the history books to find the past successes of the Valley Christian girls cross country team. Since Johana Wans won the team’s first individual CCS title in 1996 they have added five more: Evelyn Wing in 2001, 2002 and Jennifer Bergman in 2005, 2007, 2008. The Warriors have also won four individual league titles, of which Bergman’s winning time of 17:16 from 2008 still stands as the WCAL record. The Lady Warriors have finished 4th or better at the CCS Championship the last 9 of 10 years.

The past has birthed a culture of success and expectation. One that saw the current generation finish second place in CCS in 2014, qualifying for their seventh state championship in 9 years. Four runners from that state qualifying team are on the current roster: Sophia Patterson, Brianna Becerra, Lauren Cicisly and Camille Reed. That season was followed by a narrow miss in 2015 with a 4th place finish.

But a new challenge awaits as the Warriors now move to Division II, statistically the most competitive division in the section boasting the toughest standards to move on to CCS and make the state meet.

A mix of upperclassmen and new faces welcome the new challenge. Sophia Patterson has come into the season driven. With a solid summer base behind her she was the team’s top runner at the team time trial and has risen up as not only one of the team’s leaders but as one of the top runners. “I remember looking up to Kailey and Ashley as a freshman and thinking they were so fast.” Patterson said. “We are upperclassman now. Its up to us now.” 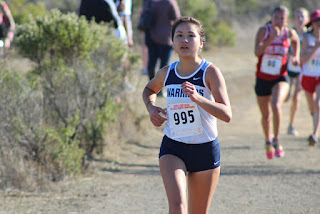 Sophomore, Mackenzie Thomas came on strong in later part of 2015 finishing as the teams top runner the last three meets of the season, including the WCAL and CCS Championships. Thomas broke 20 minutes for the first time at WCAL #2 at Golden Gate Park. She carried that into WCAL finals where she ran 19:41 which is #13 on the team’s all-time list for the championship course!

Brianna Becerra was clutch last season in league meets finishing as one of the top two team finishers in all three league meets. At WCAL #1 she set the team time record for the 5k Baylands course with a time of 21:09. She followed that up running 20:30 for the 3 mile course at Golden Gate Park in WCAL #2 and 20:37 at WCAL finals at Crystal Springs. Becerra has a personal best of 12:15 at 3200 metes from her freshman year.

Kayla Nanez is coming off an incredible freshman year that saw her win the Valley Christian freshman of the year honors, competing at the varsity level for cross country, soccer and track & field. Nanez set the freshman 400 meter record in track and was a key contributor on the cross country team last fall. Her best performance came at CCS where she and Thomas paced the Warriors with the top two finishes of the day. She has a personal best 20:50 at Crystal Springs.

Hannah Theaker has been on a steady upward trajectory and has blossomed into one of the team’s top runners. She ran 5:56 for the mile and was an 800 meter finalist on the track last season ending with a personal best 2:30. 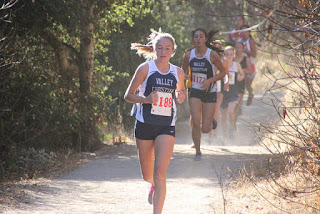 Camille Reed came in strong as a freshman and once again is one of the team's top varsity runners. Battling an injury throughout 2015 she is looking to get healthy and get back to old form. Reed ran 20:03 that freshman year for three miles at Golden Gate Park. Her best of 21:11 at the CCS Championship from Toro Park stands as one of the top freshman times in school history.

The Warriors strength this season will once again be in their depth. Lauren Cicily returns for her senior year and has been a big contributor in the early going. Senior Maggie Theaker continues to impress as does Ashley Clayton, Jen Kepler, Christina Bruckner who all add to the team’s depth this season. A number of freshman look to be contributors in 2016: Katelyn Stone, Rebecca Rey, Alexis Mahon and Jordan Han highlight a talented freshman class.