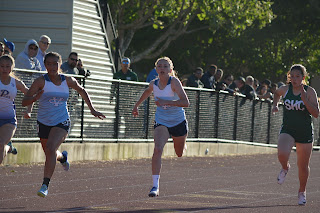 The Lady Warriors finished atop the podium in seven individual events and runner-up in six others. 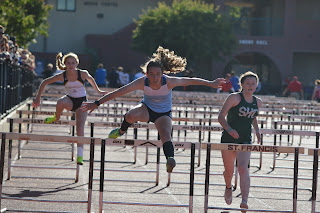 400
Skye Scott shot out of the blocks the first 200 meters, pushing the effort throughout the race to finish second in a personal best 63.14.

100
Nina Barry and Fallon Dexheimer finished 1-2 in the 100 meters both in personal best times. Barry had a fantastic start the first 30 meters and set herself apart from the field running 12.69. The race was just over the legal wind limit of 2.0 meters per second with a +2.2 tailwind. Dexheimer also had a great run finishing in 12.92. Courtney Clarke was 13.93 for 9th.

800
Ashley Clayton has had a super season running a personal best 2:24.74 at last week's WCAL Trials, a time that ranks #10 all-time for the Warriors. Heading into the meet she knew she would have her hands full against a strong field. A "slow & go" pace of the first lap, combined with a heavy headwind on the back stretch made for an interesting strategic race. Clayton held to the pack and put on a big kick to finish the last 100 that fell just short of a CCS qualifying position placing 4th in 2:27.00.

The JV girls race on the contrary shot out with a blistering first lap as Christine Albrecht and Carly Trent dueled through the first 500 meters. Albrecht held on to finish 2nd in 2:31.50. Sophia Patterson completed a strong double finishing 5th in 2:38. Maylene Aguilar coming off a cold was 8th in 2:41, Hahn 12th in 2:47.

300 Hurdles
Caitlyn Rowland fell victim to the flu making its way around campus but it didn't show as she hit a lifetime best in the 300 hurdles in 46.91 to finish 3rd. She moves to #2 all-time for the Warriors. It was a strong run in tough conditions that fell just short of the CCS auto-qualifier and just 0.1 from second place. Her time ranks #14 in CCS this season.

3200
Katelyn Stone won the WCAL Championship at 3200 meters running 11:30.10, a 22 second improvement of her personal best. A group of five athletes set a solid pace for the first mile passing in 5:50. Then the pace quickened. "I just kept telling myself to hold on as long as I could," Stone said of the race. Two laps later it was Stone who was pressing. Closing the final half mile in 2:42 the freshman took the win punching her ticket to CCS. Her time ranks #5 all-time in school history.

It was a strong showing in the 3200 for the Lady Warriors as Jordan Hahn also won the JV Girls race the week prior. Hahn improved 30 seconds in her race to win in 12:06, a time that is #11 all-time in school history. 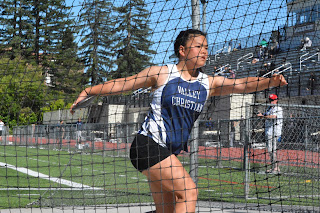 Camille Johnson won the varsity girls shot put marking the fourth consecutive year a Valley Christian athlete won the event. Elena Bruckner won three consecutive titles from 2014-2016, this year Johnson took the title with a personal best throw of 35-8. Johnson, who finished 5th in the Junior Olympics for the Javelin and will throw for the University of Texas next year, picked up the shot put for the first time this spring. Her mark is currently #6 all-time in team history. Three Warriors finished in the top 5. Anna Maumalanga finished second with a season best 34-9.5, Liz He was fifth in 31-0, just inch off her personal best.

High Jump
Yvonne Ma jumped 4-4 to finish fourth in the junior varsity high jump. Ma was one of six athletes who all tied at 4-4 but went to the tie breaker for placing discriminating by the number of misses.