Belmont, CA – The Valley Christian Warriors began the championship portion of their season Wednesday at the WCAL Finals at Crystal Springs in Belmont.  The Girls team finished 4th led by Christine Albrecht, finishing in 2nd place.  The Boys team finished 5th, led by Will Luders in 11th in 16:06, which currently place him #2 all-time for the Warriors.

The girls team advances to the CCS Championship hitting the automatic qualifying time. It was a near miss for the boys 25. They advance three individuals: Will Luders, Ryane Li and Nate Moore.

It has not been an easy year for the Warriors who have had to overcome their share of adversity.  The girls’ needed a perfect race from the top 5 and got it, narrowly dipping under the qualifying time by just 9 seconds. It is a comeback for the Lady Warriors following last year's struggles at WCAL which saw them not qualify as a team for the first time in nearly 15 years. Battling injury from many of its runners it took a collective team effort from the Girls. "They ran their butts off," Coach Wassell exclaimed after the race.

Christine Albrecht found herself gapped between the leader Gianna Mendoza and the chase back. She held strong through 2 miles passing in 12:27 and held her position to the finish. Her time of 19:02 is #7 all-time for the Warriors. Freshman, Brynn McMahon finished 11th in 22:07 and debuts at #20 on the Warriors all-time list. She was followed by her sister Alexis McMahon (20:30) running a personal best my 20 seconds!  Katelyn Stone has battled injury all season and despite spending a lot of time in the pool, running just twice a week she managed to finish in fight through to finish 21:44. Maylene Aguilar was clutch running a big season best to finish in 22:19 and secure the automatic team qualifying time.

Not to be outdone the boys team saw some outstanding performances of their own. Will Luders, a sophomore, was the top finisher for the Warriors.  Aggressive from the start, Luders came through 2 miles in 10:27. He held on to finish in 16:02, passing Joe Renati to move to #2 all-time. Ryan Li, a freshman finished in 16:54. His mark moves him on to CCS and was the fastest freshman time of the day for all of the WCAL. Senior, Nate Moore continues to show his improvement qualifying for CCS running a personal best 17:25. Noah Shinn who has battled injury all season battled through to finish in 17:44. Jack Adamson rounded out the scoring running 18:14. In the end it was a solid day for the Warriors as the team continues to build and grow.

The Warriors will return to Crystal Springs on November 10 to compete in CCS Championship. Boys race at 10 am, Girls 10:35.


Posted by Warrior Nation at 1:23 PM No comments:

The youthful varsity boys cross country team continues to show the promise of the future finishing 5th in WCAL #2. Led by Sophomore Will Luders ran the #3 all-time mark in team history for the Warriors running the 3 mile course in 16:28. He was closely followed by Freshman, Ryane Li in 16:48. His mark is #5 all-time and was within one second of Luders Freshman record set a year ago. Senior Nate Moore continues his stellar season with a big personal best of 17:20. His time is #19 all-time for the Warriors. Noah Shinn continues his comeback from shin splints that kept him out much of the early season. Shinn dropped decent time over last week and continues to show steady improvement heading into the Championship meets coming up. Jack Adamson hit a personal best, running his best race of the season finishing in 17:46 as all five scoring runners dipped under 18 minutes. The boys team time of 86:02 puts them on the bubble for CCS qualifying and will need to match this performance in two weeks at the WCAL Championship. The team qualifying time is 86:01.

Christine Albrect led the Lady Warriors with a 4th place finish running the three mile race in 19:11. Freshman, Brynn McMahon continues to impress finishing 10th in 19:46. She was followed by Alexis McMahon who continues to show steady improvement throughout the season, ran a personal best 20:14. Katelyn Stone continues to return from injury. Running only twice a week took nearly a minute off from her time a week ago to finish in 21:32. Maylene Aguilar had her best race of the season rounding out the scoring team in 22:23. Girls finished with a team time of 103:09.

The freshman girls continue to develop and show promise. Natalie Rivas led the Frosh-Soph girls with a run of 23:41. Grace Trinh (24:01) and Reena Kim (24:53) rounded out the top 3. Ella Pond was the top finisher in the JV girls race finishing in 25:38.

The Warriors will compete in the WCAL Championship October 31 at Crystal Springs. Races start at 2 pm.

Posted by Warrior Nation at 2:46 PM No comments:

Posted by Warrior Nation at 8:31 PM No comments: 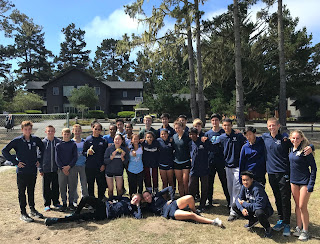 Posted by Warrior Nation at 11:43 AM No comments: