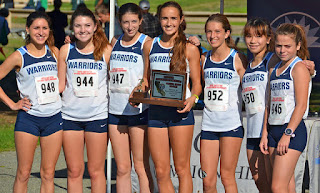 San Jose, CA - The Valley Christian girls cross country program has a long history of success, qualifying athletes to the California State Championship every year since 2005. In that span the girls have advanced as a team seven times and look to add to that number this season.

Coming off of a second place finish behind the top ranked team in 2015 the Lady Warriors once again find themselves in a fight for a podium position. Last season three teams were separated by less than 10 points for the top three team positions and this year is shaping up to be even more competitive as Prospect, Saratoga, Aragon and Sacred Heart all have their own aspirations of advancing.

The Warriors strength is in its pack. Finishing second last season without a single runner placing in the top 20 the low time spread and depth is the Warriors advantage. Kailey Eddy is returning to form after being sidelined by injury last season and has looked strong in the early going. As a sophomore Eddy ran a personal best of 19:05 on the Woodward Park course and 19:19 at Crystal Springs.

Nicole Favre is back after finishing the season as Valley Christian’s top runner at the CCS and State Championship last season. She came on strong in the late season running 20:45 for the 5k Woodward Park course. 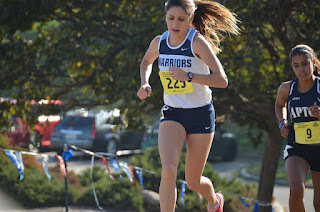 Last season it came down to the number 5 runner and that was Vanessa Giacalone. After a teammate was unable to finish she stepped up for a big performance that ultimately carried the team to the podium. A strong contributor since her freshman year Giacalone has personal bests of 21:36 at Toro Park and 21:31 at Crystal Springs.

Kiko Li was a key contributor on last year’s team and had a breakthrough season on the track qualifying for the WCAL final at 800 meters. She has run 21:06 at Crystal Springs and 21:41 at Toro Park.

Camille Reed was one of the top runners for the Warriors last season as a freshman, running 20:03 for three miles at Golden Gate Park. She also has personal bests of 20:44 at Crystal Springs and 21:11 at Toro Park.

Brianna Becerra stepped up and filled in for at the State Meet running 22:46, respectably. Perhaps it was a catalyst as the blossomed into the team’s top 3200 meter runner ending the season with a 12:15 personal best. Sophia Paterson also competed in last year’s state meet a an alternate and also was given a shot to compete. Finishing in 22:53 she carried that experience with her and had one breakthrough after another in the spring track season finishing with personal bests of 2:33 for 800 and 5:54 for 1600.

Hannah Theaker is another welcome surprise. Running a solid 22:43 for three miles as a freshman Theaker kept improving finishing the season impressively with a personal best of 12:56 at 3200 meters. She continues to impress in the early season and is looking to be a big contributor to the team this fall. 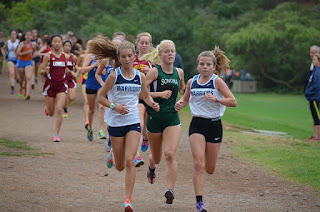 Strong leadership comes from upperclassman Maggie Theaker, Leia Wang and Grace Cardona. Theaker and Wang both had a strong track season of their own; Cardona has been strong in the early going and has demonstrated great leadership to the younger runners.

Freshman to Watch:
A solid core of freshman will also contribute to the teams depth this season. Mackenzie Thomas, Kayla Nanez, Ashley Clayton and Sandhya Bellary have been impressive in early season time trials.

The Lady Warriors officially open their season at the RLS Invitational Saturday, September 12.
Posted by Warrior Nation at 3:30 PM