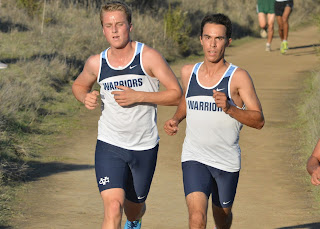 Belmont, CA - The boys cross country team has been through their fair share of adversity this fall. A series of early season injuries hindered their quest to better last year's performance but the team banded together to run the second fastest team time in school history.

Last season was a first for the Warriors as the boys finished second in DIII, advancing to the their first state meet. The core runners from that team returned and, along with a few new faces, collectively ran one of the best times in team history.

Cameron Lockard led three Warriors under the 17 minute mark on the Crystal Springs course. It was a solid performance that began with a strong opening mile of 5:24. He went on to close each of the last two miles in 5:44 to record a finish time of 16:53, the tenth fastest in team history.

Lockard has been a source of consistency for the Warriors in an otherwise turbulent year. He had a string of strong performances early in the season highlighted by a 5k personal best (17:43) at Woodward Park on a hot day. He followed that up 10 days later with another personal best run of 16:55 for three miles at Golden Gate in WCAL #2. The trend continued into league finals where he went on to finish with his best race of the year.

Joe Renati started the season setting the team record at this year's Watermelon Run, bettering Sean Davis's mark by 2 seconds. Battling through what he thought was a cramp the pain worsened and he was diagnosed with a hernia. Post surgery and recovery time Renati tried to run again and it was slow going at first. A half mile felt like an endurance test. Each day felt better and he slowly added the length of his run. After a week of running WCAL #2 came around and gave it a try. He ran 17:34 for the three mile race.

Two weeks later he was on the starting line of the WCAL Championship with just three weeks of running behind him. His toughness was never in question as he paced with Lockard and Cuevas through the hilly Crystal Springs course to run 16:56 and qualify for CCS. 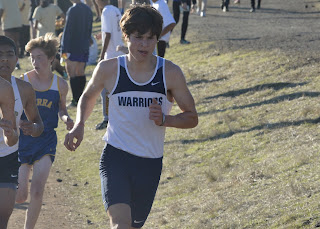 Sam Cuevas has been outstanding this season finishing eleventh in WCAL #1 and tenth in WCAL #2. In those races he set the team record for the Baylands and Golden Gate Park courses running 15:59 at the later. Opening the first mile with a strong 5:06, Cuevas battled through cramping in the later miles to hold on to a qualifying position in 16:57.

Wesley Deffenbaugh has had an outstanding season and was a welcome addition to this year's squad. Moving from Southern California he had an immediate impact on the varsity team and saw a huge jump in performance personally. In his first race of the season he broke 18 minutes for the first time,  running the Crystal Springs course in 17:48. He continued to chip away at his personal bests cracking 17 minutes at Golden Gate Park in WCAL #2 running 16:57. A strong competitor, Deffenbaugh suffered a late season setback just days before the WCAL Championship that handicapped his performance. Nonetheless he battled through running 17:31, just two seconds off the CCS qualifying time of 17:29.

Jonathan Pappas stepped up to the varsity level in efforts to help his team qualify for the CCS Championship. It was going to take a strong over-all performance from all but to have a shot they would need the freshman to take on the challenge of competing in varsity. Without hesitation he accepted the opportunity to help the team. Pappas has had a strong freshman season culminating with a run of 18:52 in the varsity boys race. He ran a season best 18:25 at WCAL #2 and has steadily improved throughout the season. His time was an impressive 72 second improvement from the Crystal Springs Scrimmage in September.

The depth and talent in the WCAL is unparalleled as the league features the top teams in CCS. If you are not under 17 minutes you are off the back. To aid in the team's quest to qualify for CCS the team knew Pappas would have the challenging task of running separated from the pack for most of the race. Ragav Saran stepped up and volunteered to run with Jonathan as long as possible to give the team the best opportunity to qualify. Taking Pappas through the mile mark in 5:53 Saran still held to impressively run a personal best 19:27, an 89 second improvement form his run here at the start of the season. Even more impressive was his improvement from his freshman season where he improved 3 minutes from his finish of 22:29 in 2015. 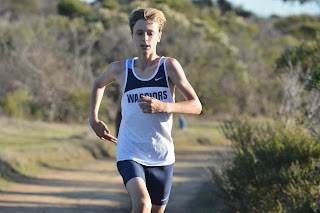 The Varsity boys finished 8th in WCAL with a team time of 87:18. Cameron Lockard, Joe Reanti and Sam Cuevas advance as Individuals to the CCS Championship November 12th at Crystal Springs. The DII scheduled start is 1:30 pm.

It was a stellar day for the Frosh-Soph team as every runner hit a personal best on the day. David Shao and Aaron Stevens were right on the 20 minute bubble running 20:03 and 20:09 respectively. Both improved over 90 seconds from their first run at the Crystal Springs Scrimmage in September. Stevens entered the season with a mile best over 7 minutes and by end of the season was running the hill 3 mile course at about 6:45 per mile illustrating an impressive improvement over the course of the season.

The biggest improvement came from Dylan Holder and Zach Mullis. Holder improved a whopping 2:45 from his first race in September, Mullis 2:25. Hunter Lui had the biggest jump on the day going from 24:42 to 21:46, an improvement of 2:56.

Jack Adamson has shown steady improvement all season as well. Running 22:27 for the 5k course at Baylands he cracked 21 for the first time at Golden Gate Park with a time of 20:54. He took another step forward running 20:37 at Crystal Springs finishing as the team's #3 runner on the day. Kaden Tang has also shown a huge improvement this season running 23:06 in WCAL #1 and closing out the season running 21:35. Wesley Liao also ran a personal best running 23:19.

Preston Nguyen was the lone representative in the junior varsity boys division and went on to run nearly a two minute personal best to finish in 21:31.