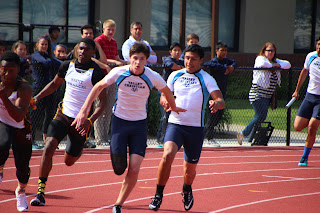 Mountain View, CA - The Warriors continued league action traveling to Saint Francis, Wednesday. Facing one of the top teams in the WCAL the Warriors put up numerous season bests, a U.S. #1 ranking in the girls discus.

It was an outstanding day for Bruckner who put up perhaps one of the strongest doubles ever seen in WCAL history. The venue has been good to Bruckner, it was here at the WCAL Finals last May she threw the #10 all-time mark in US history with a throw of 182-6. Her first visit since last years breakthrough once again resulted in a national leading mark, this time of 181-1. Bruckner is also the current outdoor leader in the shot put as well, where she surpassed 52 feet for the second consecutive week with a mark of 52-3.

Posted by Warrior Nation at 8:53 PM