Salinas, CA - The Warriors opened the 2014 season at the Early Bird Invitational. Held at Toro Park in Salinas, the 3.0 mile course will host the CCS Championships in November and featured over 2500 athletes and 50 teams from throughout Northern California.

Nathan Lynch led an impressive performance for the boys team that collectively matched the team record of 91:09 set in 2011. Lynch moves to #4 all-time with his mark of 17:23 but it was the strength of the core runners that was most impressive. Six runners ran in the mid 18's or faster as four of the top five runners earn recognition in the top 16 marks all-time for the Warriors. Justin Baraona improved nearly 90 seconds over last year's time and moves to #10 all-time for the Warriors with his finish of 18:13. Joining him on the all-time list is Nedu Ndili and Peter Enfantino who both ran personal bests.

While the younger runners enjoyed the early morning fog, the sun broke through for the upperclassman. Just seconds off their personal bests were Jeremy Dong (18:32) and Jason Li (18:33). Cameron Lockard, a baseball player in the spring, is on the comeback path after having to take the summer off.  Lockard continues to progress and his time of 19:00 was a personal best and a moral boost that he is returning to form. Freshman Joseph Reanti was impressive his first time on the course running a 19:33. 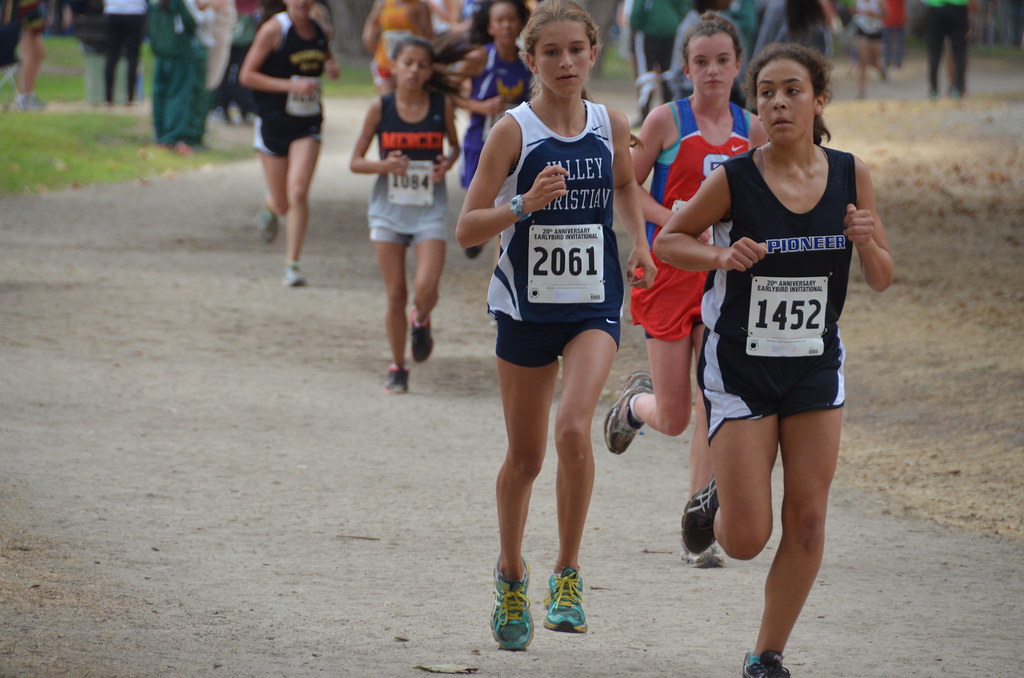 Freshman Camille Reed was the top finisher for the Lady Warriors debuting with a very solid 21:28, her time places her to #17 all-time for the Warriors. Nicole Favre had the second fastest mark of the day. Running in the community race due to a commitment later in the day, she finished in a respectable 22:15, just off her personal best of 21:45 run in last years race. It was then a slew of new-comers. Kiko Li, a sophomore, is in her first year of cross country and continues to improve every week.  Running a range of events last year in track her resume included every distance from 100-800 meters, including the hurdles.  By the end of the season she had focused in on the 800 meters and ended up a finalist at the WCAL Championship in the JV division, respectably.  Carrying that momentum with her this fall she ran strong in the team time trial and impressively finished third on the day for the Warriors in 22:49. Brianna Becerra, a freshman, and sophomore Lauren Cicisly also had strong performances.  Cicisly, a soccer player, started fast.  While the quick pace took the toll later in the race she held on and ran competitively all the way to the finish.

The Warriors head south again this week as they will compete in the RLS Relays in Pebble Beach.

Posted by Warrior Nation at 1:45 PM