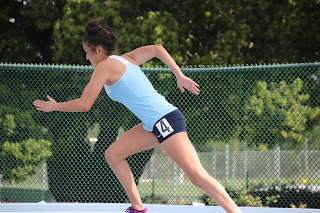 The throws crew saw numerous personal bests, including a huge breakthrough from senior Anna Maulalanga. Throwing into a headwind is not normally considered ideal conditions for the discus but Maumalanga launched one 124 feet-5 inches away. That mark betters her personal best by 5 feet and currently ranks her third in CCS.

In the boys discus Max Moore, the current the school record holder in the event, is back in his groove winning with a season best 140-2. Today's performance moves Moore atop the WCAL rankings and #7 in CCS. Dylan McCreery got the win in the boys shot put and remains undefeated in WCAL. Elizabeth He launched a huge personal best in the girls shot put, surpassing 30 feet for the first time, winning the event with a mark of 31-1.

It was an impressive showing in the distances, highlighted by a trio of strong performances in the girls 3200 meters. Katelyn Stone moves to #9 in school history finishing in 11:52.50. Her time currently is ranks #15 in CCS and is the third fastest freshman time. Jordan Hahn (12:50) and Sophia Patterson (12:57) were also impressive, both running personal bests and cracking the 13 barrier for the first time. 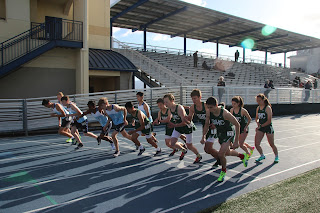 In the girls 100 meters six girls dipped into the 13's for 100 meters. Freshman Nina Berry and Fallon Dexheimer are in their first week of track after a deep playoff run by the basketball team and they were solid running 13.39 and 13.62 to finish 1-2. The depth of this year's freshman is outstanding as Amber Lao continues to be a leader on the sprint team finishing in 13.65 and right with her Emily Hidalgo in 13.70. Sky Scott (13.89) and Courtney Clarke (13.99) also got under the 14 second mark.

The exemplify the talent and depth of the youthful Lady Warriors, The top two fastest marks this season in the WCAL are Lao (13.38) and Berry (13.39). Four of the Lady Warriors are currently ranked in the top 6 freshman in WCAL.

The Warriors will compete in the Avis Kelley Invitational this Saturday at Gilroy High School.