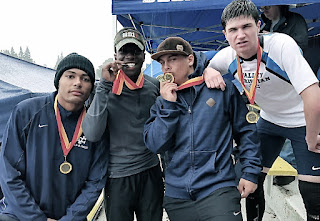 It was a complete team effort for those competing in the South Bay, the boys won the team title bettering runner-up Willow Glen by 15 points.

It was a strong showing for the second time in as many weeks for the boys 4 x 100 meter relay team. The team of Nick Trofort, Charlie Bostic III, Matt Weeks and Trent Laubach clocked a winning time of 44.51 setting the tone for a the rest of the meet as multiple Warriors earned podium positions on the day.

The field events were once again a strong point for the Warriors. Max Moore had a huge day getting his first invitational win and personal best in the discus. His mark of 140-0 moves him to #3 all-time in team history. Top finishes also came from the boys high jump as Mitchell Rohr finished atop the standings with a mark of 5-6. Athiya Iese won the girls shot put with a personal best 39' 4.5" a mark currently ranked second in CCS.

Posted by Warrior Nation at 1:28 PM