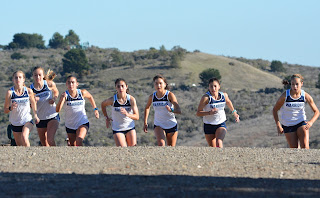 Crystal Springs is known for being one of the most difficult courses in the West. The course was dug out from the watershed in 1971 and has not changed in the 45 years since. In that span outstanding athletes have come through Valley Christian, everyone of them running the famed course in Belmont. The school record and WCAL Championship record belongs to Jennifer Bergman who ran 17:16 in 2008.

The first mile opened with Freshman Jordan Hahn, Sophomore Mackenzie Thomas and Junior Sophia Patterson packed together all crossing the mile all in 6:22. They were followed closely by Kayla Nanez (6:32) and another pack of comprised of Camille Reed, Hannah Theaker and Katelyn Stone who came through at 6:40. 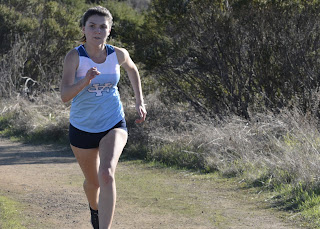 It is no surprise that the toughest mile is the last. Starting with a steep climb and a long steady uphill to the finish line it can be agonizing on tired legs. Despite the difficulty the strength and determination prevailed. Leading the charge to the finish was Jordan Hahn with a seventh place finish earning All-WCAL honors. Her time of 19:16 is #7 on the team's all-time list. She was followed by Mackenzie Thomas who finished 11th in 19:46, who also earned all-WCAL honors. Sophia Patterson crushed her personal best to finish 16th in 20:14. That time is an impressive 89 second improvement over her personal best.

Camille Reed continues to work back from injury and competed magnificently in her third race this season. Opening her her season with a 25 minute run for 5k she dipped down to run 22:20 in WCAL #2. She took another big step running just off her personal best time with a finish of 20:55. Hannah Theaker also had an outstanding run of her own bettering her personal best by 14 seconds. Her time of 21:05 was good for 28th place. Right behind was Kayla Nanez who held on strong. Battling congestion and running through a cold the last mile took it's toll but she held on to finish in 21:18. Katelyn Stone also battled through breathing problems to finish in 21:28. Despite the unfortunate circumstance she finished just 7 seconds off her personal best.

The Frosh-Soph girls have been impressive all year and the WCAL Championship was no different. Alexis McMahon and Kailina McClendon took the team through the first mile in 6:55. Maylene Aguilar was out running with a purpose and came through the fastest opening mile all year with a 7:03. Next was Ashley Clayton 7:14 and Christina Bruckner in 7:15. Bruckner, one of the team's top runners all year was unable to go on due to breathing difficulties from asthma. 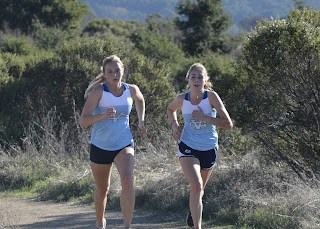 
McMahon went on to an impressive finish that resulted in third place. Her time of 21:49 was her fastest time of the year as was her placing in the Frosh-Soph girls division. McClendon finished in the top 10 with a personal best 22:20, an incredible 1:51 improvement from her first run here in September. Clayton finished 17th in 23:10, Aguilar 23:30 in 20th. It was a breakthrough day for Aguilar that saw her best placing this season and a personal best by 3:34 from earlier this year! Janet Qian wrapped up team scoring to finish 34th in 24:22.

Lauren Cicsly and Maggie Theaker wrapped up their high school careers at Crystal Springs finishing in 24:25 and 25:26 respectively. Janea Salinas and Jennifer Kepler has an outstanding showing ending their season with personal bests. Salinas finished in 24:22, her best showing this season. Kepler finished just behind in 24:40, an improvement of nearly a minute from her first race here in September. Brianna Becerra wrapped up the team scoring finishing in 25:27.

The Varsity moves on to the CCS Championship November 12th. They will compete in DII for the first time in school history and are in the hunt for a state qualifying position. Gird DII race begins 2:05 pm at Crystal Springs.