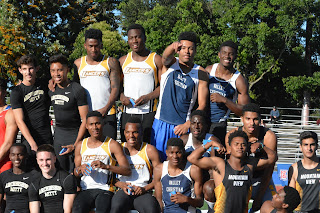 Gilroy, CA - The Valley Christian boys Track & Field team finished third place at the CCS Championship, the highest finish for the boys program in school history. It was a historic night that saw every Valley Christian athlete competing in the CCS Finals finish on the podium.

The evening began with an impressive run by the 4x100 relay, matching their season best 42.05 for a second place finish. The relay team has been back and forth with Saint Francis for the #1 ranking all season and entered the meet the top seed. Despite coming in with the fastest time of the season, it was the Warriors who entered the meet with a bit of uncertainty. D'Von Lang fell ill and missed nearly the entire the week. The week prior Charlie Bostic was pulled from the 200 trials as a precaution after his hamstring cramped at the end of the 100 meters. Once the gun went off however none of it mattered. The team made up of three junior and one sophomore were dialed in, coming together and punched their ticket to the State Championship.

It was a short turn around for D'Angelo McKenzie who just 40 minuted later lined up for the 110 Hurdles. McKenzie finished second in a wind legal 14.83, running into a slight -0.2 headwind. His mark lowers his school record and will mark his first appearance in the state meet in the event.

The 100 scored the Warriors 14 points in the team standings with a 2-3 finish. Charlie Bostic finished second in 10.95 running into a -0.4 headwind. Nick Trofort had a big run from lane one to finish third in 11.03.

Matt Weeks comeback from a collapsed lung just four weeks ago was complete as he finished second in the triple jump with a mark of 45-2, just 1/2 inch away from the win. The senior finished just off the podium at last year's finish and has been on a mission all season. He is currently #2 all-time in school history and after graduation on Saturday also headed to the state championship.

Dylan McCreery finished fifth in the shot put with a mark of 50-7.75. McCreery hit a personal best 52-2.5 winning the WCAL title earlier this season. The four points here were huge, propelling the team to a third place finish.