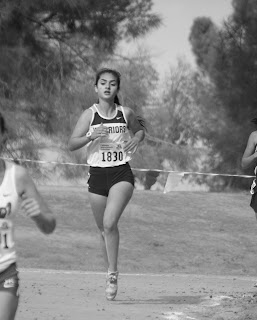 Fresno, CA - It has been a spectacular season for Valley Christian's Jordan Hahn. The freshman finished 147th at the CIF State Championship Saturday, running the 5k course at Woodward Park in 20:20, a one minute improvement from her run on the same course in October. Her time ranks #15 on the team's all-time list.

There is perhaps no better prep cross country race in America than the California State Meet. The pinnacle of every cross country season, the majority of those racing have the goal just to get here. The Warriors have seen past success here: Jennifer Bergman finished on the podium here four consecutive years. Morgan Lira managed a 15th place finish in 2011. For most mortals finishing in the top 100 likely means you were a "local hero" and top finisher in most meets in your region.

There is no way to prepare you for the quality and depth of this meet. When you combine all 5 divisions, 201 girls ran under 19 minutes for 5k. In the D2 girls race alone a pack of over 30 girls tore through the first mile in under 5:30, a blistering pace better than most can run one mile by itself. Over 150 runners crossed the mile mark under 6 minutes.

Everyone is good here.

The butterflies were there for the first year runner, expected for even the most experienced athlete. Hahn has been running for just a few months and here she was about to start the State Championship.

As expected the race started fast. The field of 200 runners all sprinting out looking to get good position before a bottle neck just 200 meters into the course. Hahn held her own and found her pace coming through the first mile in 5:50, remarkably her fastest mile she has ever run (Hahn's best mile in 8th grade was 5:58). Sitting in 82nd place at the mile mark the fast early pace took it's toll but the freshman pushed through the grind passing the 2 mile checkpoint in about 12:45 and three miles in 19:45. She kicked in the final 0.1 miles to finish in 20:20, a personal best by more than a minute.

"She ran like this wasn't her first state meet," Coach Luu said. "Even though she's not used to that first mile pace, she showed her true grit and really battled the last two miles."

Not bad for someone who a few months ago didn't know what cross country was. She was encouraged by her Dad to give it a try.

"I had no idea what [cross country] was," Hahn said reflecting back. "My dad wanted me to go to one of the practices and see if I liked it."

She did. And after the first practice she started to dream. "Being very competitive I had the desire in me to do whatever I could to be on the varsity team,"

She did more than that. Progressing steadily in early season meets she was a top contributor from the beginning finishing as the teams #3 runner at the Pacific Tiger Invitational. Her progression was steady as she had strong performances at WCAL #1 followed by a breakthrough at WCAL #2 where her along with teammates Mackenzie Thomas and Sophia Patterson finished in the 19's for the first time that season. She carried that momentum into the WCAL Championship where she ran 19:16 to finish 7th earning All-League honors. She wasn't done... Her big breakthrough came at CCS where she finished 8th in 18:52 to qualify for the State Championship.

"It was a major highlight this season breaking 19 min." Hahn said. "That PR got me the amazing opportunity to qualify for state, which ended up being almost three min faster than I had started at the beginning of the season!"

Posted by Warrior Nation at 7:42 PM