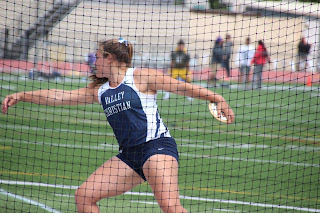 San Jose, CA - Elena Bruckner’s first first throw at the CCS Top 8 Invitational brought a mix of emotions. Frustration has built as the season progressed as the senior, and national leader, kept looking for that personal best. She has come close: a throw of 53-5 in the shot put in March was close, as was her 181-1 mark in the discus against Saint Francis a few days later.

Friday night was not perfection but it was a relief. On her first throw of the evening she sent the discus sailing 186-10 inches. That mark not only surpasses her own CCS record but is the fourth furthest throw in U.S. history by a high school athlete.

The next day it was the shot put record that would fall, again on the first throw. Bruckner’s mark of 53-7 betters her previous best by 1.5 inches and also breaks her own CCS record. Two records in two days is quite the fete but Bruckner believes there is still room for improvement.

"I'd been having a very consistent season but hadn't had any PRs yet so it was very exciting to finally break through,” Bruckner said. "My throws were far from perfect so that shows me that even bigger throws are on the way."

While records and wins are nice, the throws crew has put in long hours and the work needed to see such acomplishment. There are good days and bad, but regardless they push on. “We have our saying, ‘J.K.T.’ which means Just Keep Throwing. Don't give up,” Coach Rolle said. “If we just keep throwing, great things will happen.”

Several great things did happened this past weekend. “Personal record, school record, meet records and nationally accomplished records happened because we made the decision long time ago that despite what things look like, we just keep going. We don't quit,” Coach Rolle said reflecting on the weekend.

“I am extremely proud of each and every one of my throwers.”

In addition to Bruckner’s Discus and Shot Put records, two other records fell this weekend. The first of which came at the CCS Top 8 in the 110 hurdles. D’Angelo McKenzie bettered the 13 year old record, running in lane eight, finishing in 15.73. McKenzie is currently the #1 sophomore in CCS for the event.

McKenzie also contributed to the co-ed 4 x 200 record set the next day at the Saint Francis Invitational. A rarely contested event, the team of Caitlyn Rowland, Kayla Nanez, D’Angelo McKenzie and Nick Trofort took nearly 5 seconds off last year’s best with a time of 1:41.67.

Wednesday the school record for 300 Hurdles was bettered by Matt Weeks; The freshman record in the 400 meters by Kayla Nanez.

Another record nearly fell Friday as Sophomore Joe Renati becomes the third runner in school history to dip under the 10 minute mark for 3200 meters bettering Sean Davis’ #2 time, which Davis also ran his sophomore year. Renati took to the front of the loaded CCS Top 8 field splitting two consecutive sub 5 miles to finish in 9:51.28, just 0.44 off the school record set by Eyobed Mesfun in 2014.

Posted by Warrior Nation at 9:10 PM