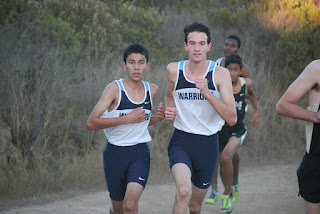 Belmont, CA - The Warriors traveled to Crystal Springs to compete in the WCAL Championship, Wednesday. For the first time in years the race saw mild temperatures in the mid-60's, setting the stage for fast times and shattered records.

Four of the ten fastest times run in school history for the Crystal Springs course were run at yesterday’s WCAL Championship. A fast first mile had Joe Renati and Nedu Ndili set the pace with a quick 5:08 opening mile. With the entire varsity team in tow the pack was through in 5:20. The effort didn't let up any in the middle mile. After a steady climb at the start, the rolling course saw the top 5 come through the second mile in 10:40-10:55.

It was a super effort in the last mile that was the difference. Mitchell Rohr made a huge move the final 800 meters moving up 10 places the last mile to finish in 16:17. His time is #2 all-time for the Warriors. Joe Renati battled through a side cramp but still managed to hold on for an impressive 16:29. Sam Cuevas ran 16:47 an improvement of nearly 2 minutes from earlier in the year.

Cameron Lockard was on a mission and put on a big move in the last mile finishing in 16:59.

"It was the breakthrough race I was looking for," Lockard said after the race. "I've been stuck in the 17:40's it nice to finally get one in the 16's."

Peter Enfantino ran a personal best 17:24, Justin Baraona was just 3 seconds off his personal best finishing a solid 17:25. Nedu Ndili was not feeling well and a quick start amplified his discomfort. After passing through two miles in 10:59 he battled through and finished in 17:44.

The boys smashed the school record for team time running 83:59. Their time qualifies them to advance to the CCS Championship on November 4, also at Crystal Springs. 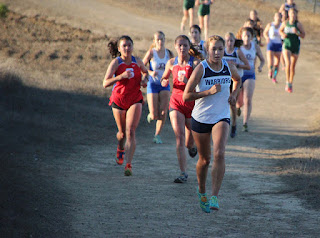 The Lady Warriors ran the automatic qualifying time advancing to the CCS Championship for the 11th consecutive year. It was a strong showing for the Warriors that was led by a slew of underclassman. Mackenzie Thomas led the way running 19:41. Her time is the 13th fastest in school history and the 4th fastest ever recorded by a freshman.

Brianna Becerra was next to finish for the Warriors in 20:37, an improvement of over 2 minutes from last season. Kayla Nanez had an excellent debut finishing in 20:50. Her performace is the tenth fastest for a freshman in team history.

Running in the number four spot was senior Nicole Favre who finished in 20:53, a 14 second improvement over last year. Hannah Theaker ran a huge personal best of her own finishing in 21:19. Sophia Paterson wasn't entirely happy with her finish but still improved handsomely over the year prior.  Kiko Li rounded out the varsity team and had a solid run after returning from injury.

The girls combined team time was impressive and the eighth fastest in team history.

The JV races also saw some amazing performances. Ashley Clayton continues to shine, her run of 22:10 was her fastest of the year. As was Sanhya Bellary who dipped under 23 min for the first time running 22:32. In the boys race, freshman

Jake DeMoss cracked the 18 minute barrier for the first time running 17:59. His time is the fourth fastest freshman mark in school history!

Both the boys and girls advance to the CCS Championship at Crystal Springs on November 14th. 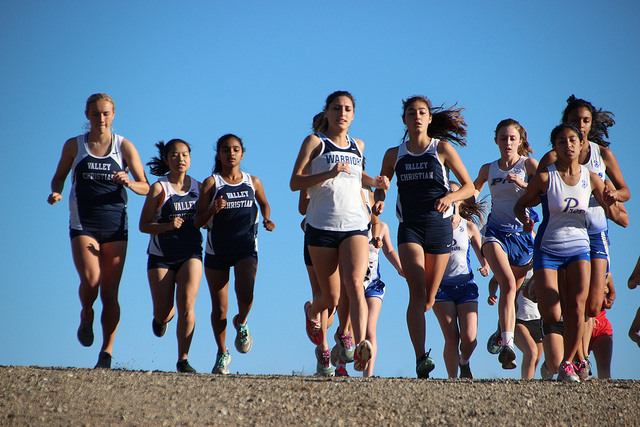 Posted by Warrior Nation at 8:08 PM