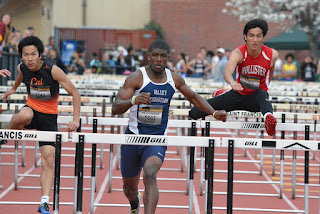 San Jose, CA - It was another spectacular outing for the Valley Christian Track & Field team as multiple records fell at the Saint Francis Invitational, Saturday.

D'Angelo McKenzie dipped under 15 seconds for the first time running the 110 Hurdles in 14.93. Running into a -0.6 m/s headwind his time is currently #1 in CCS and for the third consecutive race lowered his own school record.

It was an impressive day all around as Matt Weeks moves to #1 in CCS with a winning jump of 44-4.5.  Dylan McCreery took home the win the boys shot put with a toss of 48-0 while the team's younger runners impressed taking home wins in the Frosh-Soph 4 x 100 relay, Frosh-Soph 800 meter SMR and Frosh-Soph Co-Ed 4 x 200 relay (2 boys-2 girls). 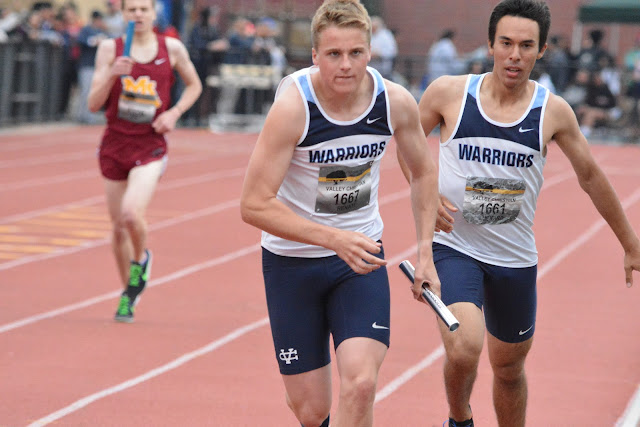 Joe Renati takes the handoff from Cameron Lockard in the 4 x 800 meter relay. The team that also included Sam Cuevas and Preston Nguyen squeaked out a school record by less than a second.