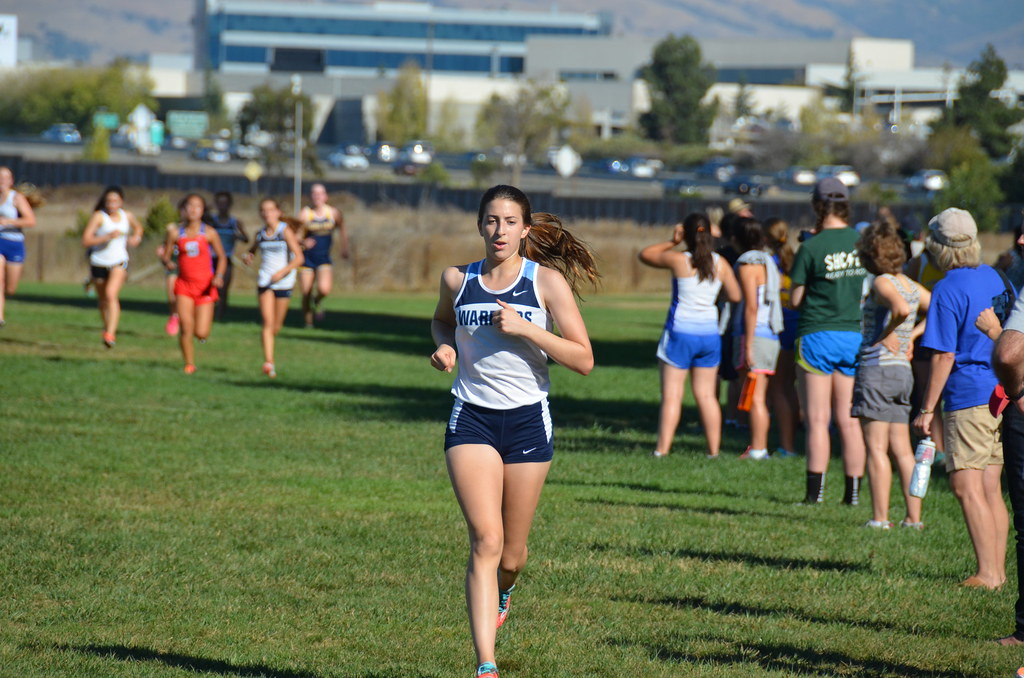 Sunnyvale, CA - The Warriors opened their league schedule competing against some of the top ranked schools in the section Thursday. Traveling to the Baylands in Sunnyvale the flat, spectator friendly course was host to the first WCAL meet of the season. Blistering temperatures took it's toll on the finishing times but the Warriors fought through as the team continued its impressive start to their season.   Currently the are girls ranked second in CCS for Division III, the boys fourth.

The Varsity girls took the heat in stride and held on for a fourth place finish behind top ranked Mitty, Saint Francis and Saint Ignatius. Nicole Favre was the top runner of the day finishing in 21:42 as the team was packed together closely. Camille Reed (21:50), Kiko Li (21:50) were next across the line and were joined by Vanessa Giacalone (22:35) and Leia Wang (23:42) who closed out the team scoring.

Brianna Becerra was impressive in the girls frosh-soph race, as was Lauren Cicisly.  Becerra took the race out hard and shared the lead through half way before the pace and the heat took its toll, she held on well for a fifth place finish.  Cicisly also was impressive and started fast finishing seventh. Freshman Sophia Patterson and Hannah Theaker were impressive in their debut as sophomore Maggie Theaker rounded out the girls scoring to help the team finish fourth.

The boys were admittedly a bit off but still had a solid showing on the day. Combined with the heat and coming off a tough week of training the legs were heavy. Dean DeMoss seemed hardly phased by the heat and found his groove, blazing the 5k course to finish in a personal best 18:08. "I paced myself at the start and as the race went on I just felt better and better," DeMoss said after his race. "I paced well and kept moving up.  I felt good today."

He was just behind Nathan Lynch who after opening in a 5:05 mile found himself gapped from the lead pack, a tough position to be in those conditions.  Grinding it out the final two miles for the 5k course he put on an impressive serge the last half mile and held on to finish in 17:44, a new team record for the Baylands course.

The varsity team was packed together nicely with just a 49 second spread from the first and fifth runners. A key part to being successful in cross country is pack running and having a strong 3-4-5 runners. For the first time in program history the team has quality depth with a strong group of about 10 runners who are challenging for a varsity spot and pushing each other daily in practice. In addition to Lynch and DeMoss a strong pack of four followed.  Justin Baraona, Cameron Lockard and Jeremy Dong, the team's 3 through 5 runners were separated by just 11 seconds.  Jason Li rounded out the varsity team finishing in 18:38, impressive in spite of suffering severe cramping. The boys finished eighth on the day but were in a close battle as Riordan and Sacred Heart were all within five points on the score board.

Strong performances also came in the freshman and sophomore races.  Mathew Weeks finished in an impressive 18:50 to be a top finisher in the sophomore race while Kyle Higdon and Joseph Reanti were top finishers amongst the Freshman field.

There were many other outstanding performances and personal bests on the day outside of the varsity races.  Will Bainbridge, a long jumper in track, went on to run 22:26 for the 5k run.  Another great run came from Patrick McCoy who didn't even know what his finish time was but was excited after the race: "I don't even know how what my time was, but I'm proud of how I ran no matter what," McCoy said.  "I told myself, 'if I throw up today, that's ok.'"

His efforts were rewarded, he finished in his fastest time ever for 5k!

Posted by Warrior Nation at 8:46 AM