The Road To State: Jordan Hahn 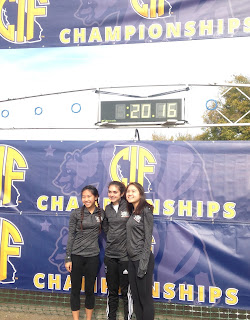 It didn't take long for Jordan Hahn to find her groove this season. The freshman is in her first year of cross country and has made one big jump after another, improving almost 3 minutes from the start of the season. She is set to close out her debut season at the California State Championship and is already one of the best runners in Valley Christian history. Hahn had a spectacular season culminating with her state qualifying run at CCS on the Crystal Springs course. Her time of 18:52 is #5 on the team's all-time list.

How did you get your start in running?
I started running when I joined my first competitive soccer team. The coaches were into us being extremely fit and have high endurance to sustain a whole game. They made us do major laps and sprints in practice. To keep my fitness in the off-season I would jog miles with my mom. Fast forward to spring 2016 when as an 8th grader I decided to try track for the first time. I believed it would help my endurance and speed in soccer. My whole season I did the 1600 and I progressed a lot through the season.  I had two great coaches and got even more interested and hooked to running than I did before. I ended track season with a 5:58 mile time and I felt I increased in speed and endurance.

During the summer I had extensive training for soccer and I also went running with my mom during my off-season. Toward the end of summer I realized that the only reason I was playing soccer was because I enjoyed the running involved in it. In July I made the huge decision that totally benefited me for the best and resulted in me finding something I truly loved and enjoyed. I quit soccer and I felt that I was was letting go of a burden I have held in for a long time.

During the summer my dad mentioned cross country to me and I will admit I had no idea what it was and initially had no interest to do it. Fast forward to a week before school starting and kept thinking about whether I should try it or not. My dad wanted me to go to one of the practices and see if I liked it. After the first practice I figured out that I really enjoyed it and thought I could do well. Being very competitive I had the desire in me to do whatever I could to be on the varsity team. Then after three weeks of practicing we had our first scrimmage race at crystal springs cross country course. I got 21 minutes and I wanted to progress and get better and better.

What was a major highlight of your season so far?
My major highlight of this season was breaking 19 min, get a PR, which got me the amazing opportunity to qualify for state, which ended up being almost three min faster than I had started at the beginning of the season!!!

What emotions did it feel like to make the State Championship?
I was elated to make state and proud to have come in eighth at CCS during my first cross country season.

What are your goals at State?
My goals at state are to improve on my last time, have fun, come in with the front pack, and represent my school in a Christ-like way.

Jordan Hahn takes on the best in the State tomorrow at the California State Championships. She competes in the D2 girls race at 11:10 am at Woodward Park in Fresno.

Posted by Warrior Nation at 7:02 PM