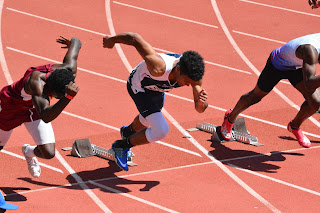 Matt Weeks inches closer to the school record in the boys triple jump (Paul Sapuder, 45-6) with a personal best 44-8. His mark is currently ranked #1 in CCS and was good for second place. Weeks is currently #4 all-time in school history in the event.

Another CCS #1 mark came from the boys 4 x 100 relay team of D'Angelo McKenzie, Charlie Bostic, Javon Sturns and Nick Trofort after scorching a 42.67 in the preliminaries that would stand as the fastest time of the day.

It was a busy day for the sprint crew as Charlie Bostic and D'Angelo McKenzie also were competing in individual events. Following the 4x100 relay, Bostic followed it up with a personal best 11.00 in the 100 meters, a mark that passes Cameron Marshall and Julian Tuyor on the team's all-time list. Bostic currently is #8 all-time in school history. McKenzie, competing in the 110 hurdles finished his prelimanry heat with a time of 15.15. Both Bostic & McKenzie qualified for the the final.

The field events were represnted well on the day as well. Anna Maumalanga finished second in the girls discus with a mark of 121-0. Max Moore finished 12 in the discus, Dylan McCreery 14th in the shot put.