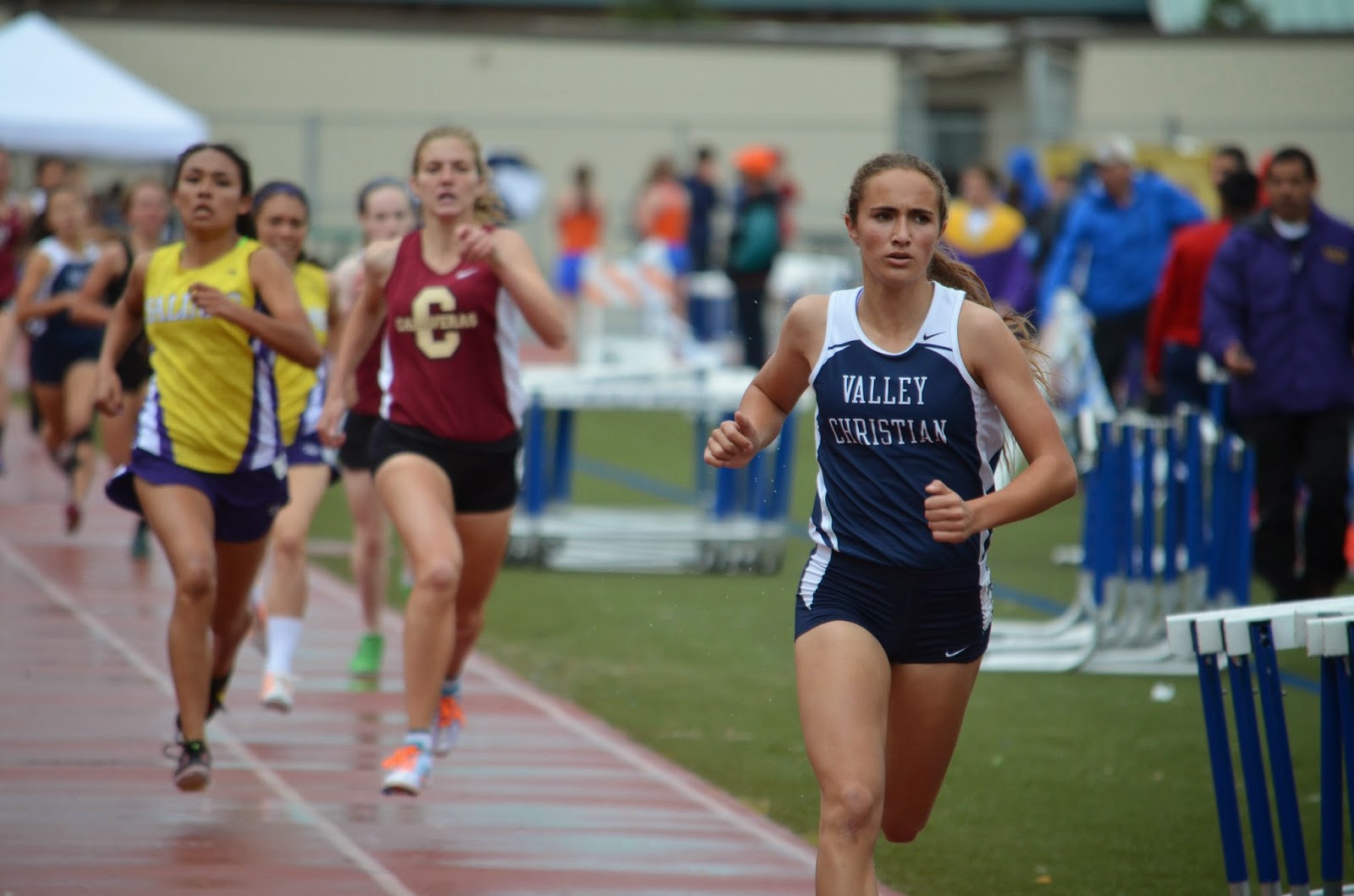 Gilroy CA - It was dark and gloomy as the day turned to night and the endless rain pelted the runway but three brave souls along with their jumps coaches endured the elements in what would remarkably result in a team title for the Valley Christian Girls team at the Avis Kelley invitational.  Sydney Clark, Elaine Ma and Taylor Johnson along with Coach Johnson and Coach Smoak outlasted the daylight finishing the event seven hours after the scheduled start. In the end it was Taylor Johnson's second place finish in the Long Jump led the Warriors to winning the team title by one point!  "They were true Warriors today," Coach Johnson said after the meet.  The Lady Warriors finished first out of over 25 teams from throughout the Bay Area and beyond.

Johnson's second place jump was one of many highlights that day for the Warriors.  Jessica Xu was first to kick off the scoring running just off a personal best in the 1600 meters finishing third in  a season best 5:21.27.  And it was a season best for Ashley Lara in the 800 who led from start to finish winning in 2:22.84 a time that ranks amongst the best in the WCAL.

It was a trio of Warriors that all finished in the top 8 at 100 meters.  Shelby Smallwood successfully defended her title from a year ago running away from the field in 12.69, a solid performance for the windy and rainy conditions.  She was joined by Talyor Johnson (13.19) and Lydia Sum (13.33).  Sum had won the 100 meter hurdles earlier in the day in 15.34, a time that is currently ranked third in the CCS. 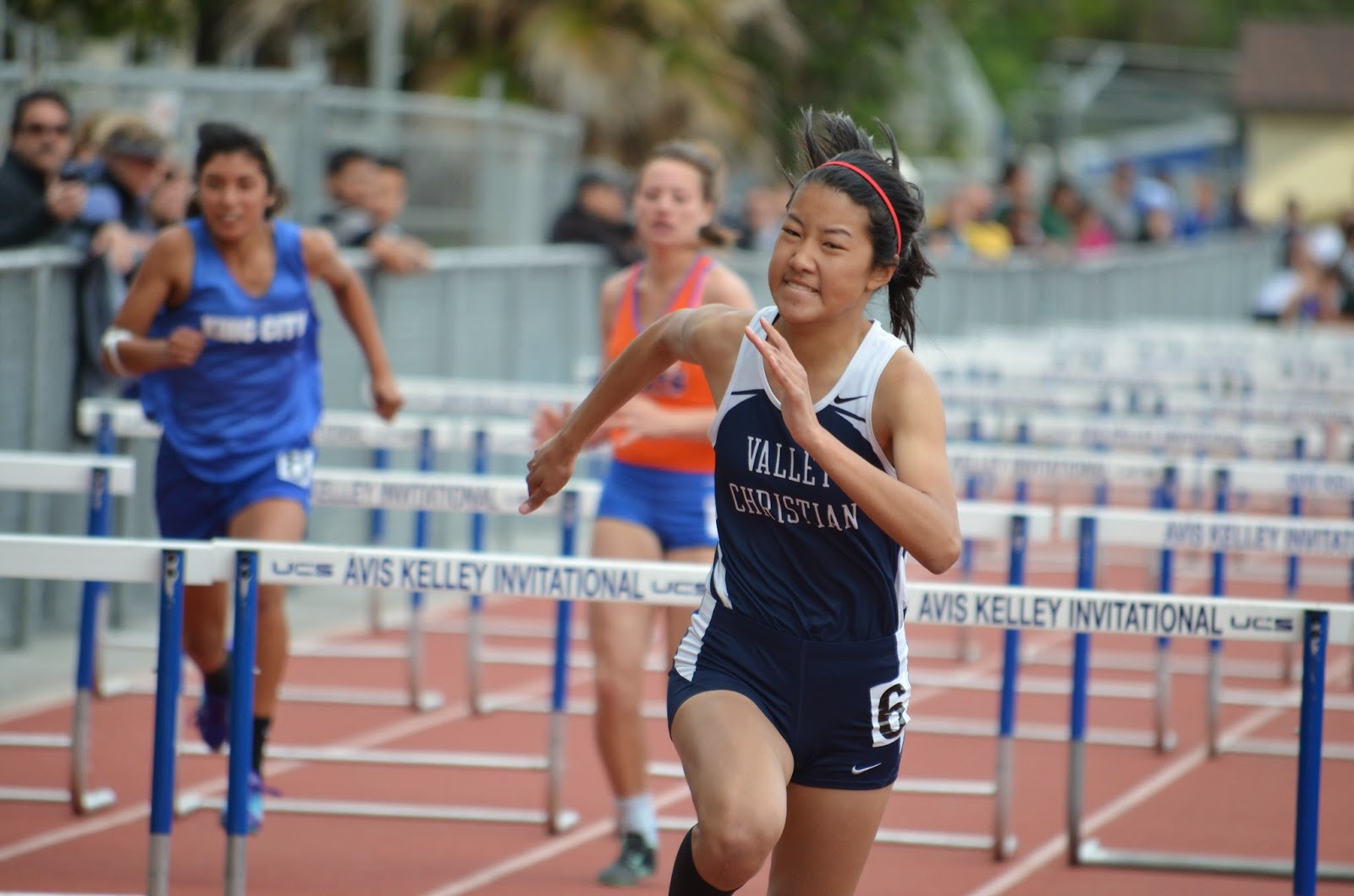 Ronna Stone was the lone representative for the Lady Warriors in the throws and did not diapoint as she walked away a medalist in both the shot put and the discus.  In general slick, wet conditions are not conducive to top marks when throwing heavy metal implements but Stone showed pose winning the shot put and finishing third in the discus, less than a foot off her personal best.

Also in the field events Elaine Ma finished a medalist with her third place finish with a jump of 4' 8".  In addition to Johnson's second place long jump she also metaled in the triple jump in her second best jump this season with a mark of 32' 4.5"

It was also a strong day for the boys as well, especially in the throws, as David Maumalanga won again in the shot put with a personal best toss of 48' 6.5".  Fa'auli Gaoteote also had a stellar day throwing 44' 5.5" which is just half an inch off his lifetime best.  Gaoteote also hit a personal best in the discus as did Samuel Acomb.  Also for the boys in the distances Jason Li ran a season best 2:06.45 in the 800 as Nathan Lynch, Matt Lundy, Samuel Cuevas and Sam Han all earned personal bests in the mile.

The Warriors continue to show steady improvement and return to WCAL action this Wednesday as they host Serra and Notre Dame at 3 pm in Warrior Stadium.