The Road to State: Joe Renati 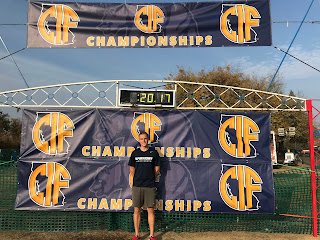 Fresno, CA - Joe Renati has had an incredible cross country season, one that culminates with the CIF State Championship Saturday. There is no better race to end your high school career than the pinnacle of high school cross country.

But getting here hasn't been easy.

Renati started the season on fire, annihilating the team time trial record by more than 30 seconds. He then went on to finish second in both the Pacific Tiger (15:26) and Clovis Invitational (15:35), both 5k courses, against some of the top runners in the state. These performances, coupled with a 15:24 clocking at WCAL #2 put him on the radar as one of the top runners in the state and it got people asking, "where did this kid come from?"

Renati's first exposure to Track & Field came in 8th grade when he went out for the junior high track team "because there was a girl on the team who I liked." That first experience saw him partake in the discus and later the mile. By year's end Renati ran 5:44 for the mile and throw around 80 feet in the discus.

It was all running after that. He came out for cross country as a freshman and posted a respectable 19:33 for his first three mile race at the Early Bird Invitational. He ran 19:57 for his first 5k at Baylands and later went on to finish the season with a time of 18:46 at Crystal Springs.
Respectable marks for a freshman who was in his first year running but nothing indicating the level he would later reach.

Renati took a big jump his sophomore season, leading the Warriors to their first team appearance at the California State Championship. He finished the season with runs of 16:28 at Crystal Springs (CCS) and 16:41 at the State Meet. He carried that momentum into his junior year where he bettered Sean Davis' trial time record. However in the week leading up to the run he noticed what felt like a side cramp that wouldn't go away.

What resulted was a hernia diagnosis and surgery that all but ended his cross country season. A tough competitor he was determined to come back to help the team qualify for the section championship. He gritted out an amazing 16:58 in league finals following 6 weeks of rest and just one week of running.

Renati has a stubbornness to him. It is that character trait that has forged him into one of the state's top runners this season today and the reason he won't give up, and won't let up, be it in training or in a race. It's why he worked so hard to be there for his teammates in 2016 and is what has motivated him to work hard throughout this season.

While Joe has transformed into one of the State's elite runners, this season's success is not out of nowhere, nor has it come easy. This summer he ran... a lot. 70-80 mile weeks were the norm and the occasional 85-90 mile week was not out of the question. He would run in the morning, then again in the afternoon. Then take his dog out for a mile jog later that evening. When he didn't run he would supplement with biking or swimming. Not because he had to but because he wanted to. While Renati's talent is evident he has put in over 1600 miles since June. He has made it a priority to get the sleep needed when training at such a volume. He has done the little things like icing and rolling out and lifting that many skip to go home early. He is here because of the work he has put in. But most importantly he loves running.

This stubbornness is evident in the way he races too. "He goes out and pushes the whole way. He doesn't quit," Coach Small said.

The setbacks, the training, the perseverance have brought Renati to this point. It has been a 4 year journey that has required perseverance, determination and lots of faith. But Joe Renati battled and never quit. He will lace them up as a Warrior one final time November 25th, competing in high school's biggest stage.