San Jose, CA -  Track & Field by every definition is an individual sport. As an athlete you can feel isolated, alone, an individual. When it comes time to perform it is you alone who must internalize the moment and perform when the stakes are highest. But you couldn't tell that at Friday's CCS Finals. Already punching their ticket to the State Meet, there on the fence overlooking the Shot Put arena, stood Elena Bruckner and Ronna Stone cheering. The day was not to be celebrated just yet, for their teammate David Maumalanga was in the midst of his own battle to qualify.  He was anything but alone; they were in this together.

The journey to qualifying for the her first state championship did not come easy for Elena Bruckner. Just a week prior at the CCS Trials the sophomore had little room for error, needing a big final throw to advance to the finals.  That experience of performing under pressure was vital as once again it was the final throw, this time in the finals, that was the difference. Entering the final round in fifth, Bruckner had nothing to lose and let one fly.  The result was a personal best throw of 129-1 and her first CCS title.

"I thought, 'this could be my last throw of the year so I am just going to go for it and throw as far as I can,'" Bruckner said following the event in an interview with the Mercury News.

But it was the shot put where the pressure was really applied.  Entering the meet with a season best 46-1 Bruckner sits #7 all-time in CCS History and was the favorite coming into the meet.  After fouling her first two throws, one that sailed well over the 45 foot marker, a safe 39 foot "punch" was all that needed to advance her to the next round.  It was there on her fifth throw that her winning mark of 43-1 held up for her second title on the evening.  It was the first time an athlete has won both the shot put and discus since 2008. 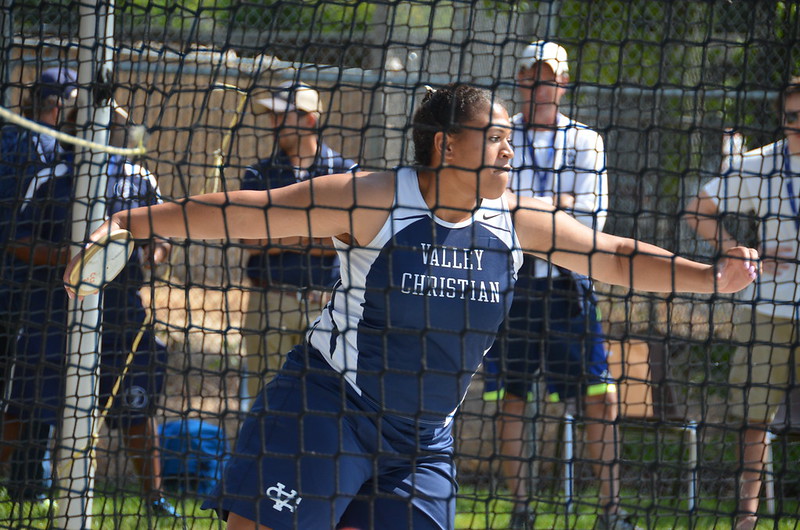 Ronna Stone had her own share of adversity to overcome.  Entering the finals Stone was the top ranked discus thrower in the section.  She has improved dramatically this season improving nearly 40 feet over last year.  Her mark of 136-8 was the top seed and was leading much of the event.  After having two throws in the 140 foot range fall just outside the sector, pushed by a heavy right to left wind, the thrower finished in fifth.  Disappointed she would need to regroup for the shot put.

That she did.  Leading through four rounds the junior never looked back finishing in second where she advances to her second consecutive State Championship.  Admittedly disappointed from her earlier result she dug deep, refocused and got the job done.  Stone and Bruckner have been impressive throughout the season and combined for 32 points in the team standings, good enough for a 5th place finish on their merits alone.

So there along the fence stood Bruckner and Stone cheering on David Maumalanga in the boys shot put.  It has been an impressive year for the senior who just discovered the event a year prior. He has improved over 10 feet since last spring and coming into the finals has sights on setting the school record and making his first trip to the State Meet.  Entering the season with a personal best 42-5, Maumalanga had dedicated himself to the craft and is often the last one seen at practice taking one last rep or performing one last drill in an effort to better his mechanics.  The result has been nothing short of spectacular. Starting the early season with top finishes at the K-Bell Invitational and a win at the Serra throws meet he broke through the 50 foot barrier for the first time at the WCAL Trials.  He has carried that momentum through the biggest meets of the year with a second place finish at the WCAL Finals and a second place finish at CCS Finals.

Maumalanga was on all night.  As the sun dipped below the horizon and the colder temperatures ensued he turned up the heat, first with a throw over 51 feet then another.  It was on his fifth throw of 52 feet, 11 inches that would stand.  He had punched his ticket to State Meet and stood in second place on the podium.

After the final throws were taken it was time to celebrate as all three competing on the day advance as a team.  The long hours, outlasting the daylight, being there long after everyone had left the track had paid off.  It has been a record breaking year for the Warriors.  Both shot put and discus records fell on the girls side, Maumalanga sits #2 all-time on the boys, just three inches off the record.  For the first time ever in school history three throwers will make the trip to state.  "I'm so happy we made it," Ronna Stone said after.  "It wouldn't be the same if we weren't all going."