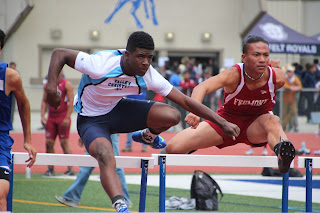 Gilroy, CA - Seven Valley Christian athletes punched their ticket to the CCS Finals this weekend and will compete in Friday's CCS Championship at Gilroy High School. The section final represents the best in region, with the top three athletes qualifying for the California State Championship.

Last season the girls finished the 3rd place team with just three throwers. The Lady warriors led in team scoring until the final event when they were passed by Los Gatos and Saint Francis who both had 4 x 400 relay team in the final. Once again the ladies are represented by three throwers and once again have a shot the podium. Elena Bruckner and Athiya Iese will compete in both the shot put and the discus, Anna Maumalanga will compete in the discus.

The boys advance four athletes to the finals: Matt Weeks (triple jump), Dylan McCreery (shot put), Max Moore (discus) and Nedu Ndili (800). All have potential to score in the CCS final and look to represent the young, up and coming boys team.

Dylan McCreery followed up his WCAL win with finishing the top seed in the boys shot put trials with a personal best 51-9.75. McCreery has improved nearly 7 feet in the shot put this season from his first varsity meet and is coming off winning the WCAL title last week. McCreery will be competing for a state spot as will teammate Max Moore in the discus. Moore bettered his personal best and school record on the first throw of 161-11 at the CCS Trials and advances as the #3 seed.

Matt Weeks advances in the triple jump with a mark of 43-1. It was his furthest wind legal jump this season. 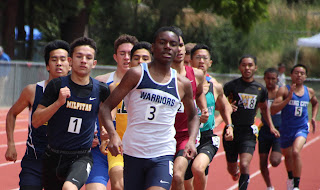 Nedu Ndili advances in the 800 meters running 1:59. Ndili took charge of the race 300 meters in as the pace began to lag and held on despite a nagging leg injury that has held him back in recent weeks. Despite the injury Ndili ran a personal best 1:56.85 last week in the WCAL finals and is one of many with a shot at the podium.

D’Angelo McKenzie finishes the season with a 10th place finish in the CCS Trials in a personal best 15.39.

Caitlyn Rowland was 21st in the 400 meters with a time of 61.30. Leaving nothing to chance Rowland took out the pace strong the first 200 meters rolling the dice with the fast start.

The CCS Finals will be held at Gilroy High school. Field events begin at 4 pm, running events at 6 pm.

Posted by Warrior Nation at 2:20 PM