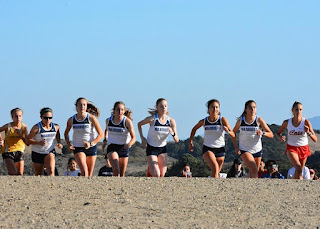 Christine Albrecht is one of those advancing to the CCS Championship. Starting with a fast pace, opting the first mile of 5:52 the early pace took it’s toll as she fell to 10th by the end of the race. Notably off her normal pace she gutted out a tough last mile to finish in tenth. Her time of 20:02 is #18 all-time in team history. Katelyn Stone also advances to CCS as she continues to round into form. Stone was the top finisher for the Lady Warriors completing the hilly 2.95 mile course in 20:01 in a personal best time that is #17 all-time for the Warriors.

It was a tough go for senior Sophia Patterson and Hannah Theaker. Patterson has consistently been in the 20-flat range all season and entered the race with a best of 20:14 run last season. Theaker has a best of 21:04. It wasn’t their day however as Patterson finished in 22:07 and Theaker 24:11.

With the majority of the varsity boys cross country team graduating last season fielding it was a youthful team lining the start of this year’s WCAL Championship. With three of the six varsity runners on the line they held their own despite half the team running in their first varsity championship. 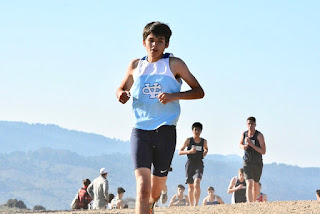 Joe Renati was the top finisher for the Warriors running 16:13 for 13th place. It was notably a rare off day for the senior who finished fourth in WCAL #2 and has run low 5 minute pace for the majority of his races this season. Though a small letdown Renati still managed a personal best time that ranks #2 in team history.

Zachary Mullis was top finisher in the JV boys running a personal best 21:13. Jacqueline Santamaria led the JV girls with a finishing time of 23:32.

Posted by Warrior Nation at 1:43 PM