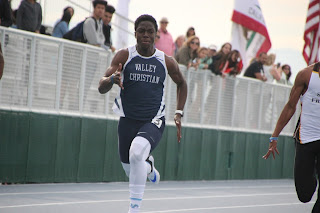 San Jose, CA - The Warriors opened the dual meet season against Saint Francis Wednesday in what was an outstanding team performance that saw 108 season best marks and two school records.

Matt Weeks jumped a school record six feet, 2 inches in the high jump, winning the event. The six-foot barrier has been elusive for the senior, jumping 5-8 as a freshman and 5-10 the past two seasons. With that mark he breaks the six foot barrier for the first time and ties the school record with Ronnie Harris and Jack Hoyt.

It was an outstanding day for Weeks also won the long jump (19-11) and triple jump (41-7.5). He also finished second in the 300 hurdles (41.83) to earn 18 points on the day. A steady contributor for the Warriors for the past four years in a range of events, Weeks is on the Valley Christian all-time list for four different events, has been a key contributor on various relays and now gets his second school record.