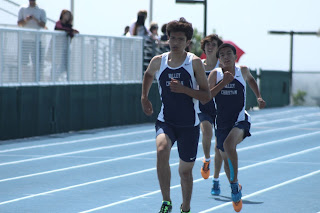 San Jose, CA - The Warriors opened league action against Serra and Notre Dame Belmont, Wednesday. Many top performances highlighted the day including top marks in the sprints and field events.

Matt Weeks had a stellar showing (in all of his four events on the day) but perhaps none better than the long jump. Bettering his previous lifetime best by more than a foot, his mark of 20-7.5 is his first over 20 feet in the long jump. Weeks also followed that up with a season best in the triple jump (41-11) and high jump (5-6). He was also a member of the Warriors winning 4x100 meter relay.

And it was another strong early season result from the sprint crew. Boys 4 x 100 relay continues to roll, winning their third consecutive race this season. Sophomore Charlie Bostic won the 200 meters in 22.85. His time ranks him 11th fastest in school history. Nick Trofort also in the race ran a lifetime best 23.66.