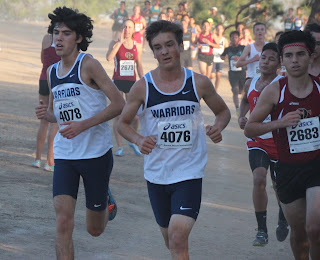 Fresno, CA - The Valley Christian cross country team traveled to the Central Valley to compete in the Clovis Invitational, Saturday. Dubbed by many as the "Pre-State" meet, the race featured over 4300 runners from throughout the state and as far away as Texas.

The varsity boys continue to rewrite the record book, bettering the school record for team time once again, this time by more than three minutes. The boys ran six of the eight fastest times in school history running an impressive combined effort of 86:16, averaging just 17:15 per runner. Joe Renati cracked 17 min for the first time running 16:51. Nedu Ndili was close behind, also dipping under the 17 mark with a 16:59.9. Mitchel Rohr hit a personal best for 5k with a 17:15 showing while Sam Cuevas continues to show steady improvement running 17:23. Cameron Lockard (17:45), Dean DeMoss (17:46) and Peter Enfantino (17:58) rounded out the varsity team as all seven runners cracked 18 minutes with a scoring differential of just 54 seconds.

The frosh-soph boys had a lone entrant but Jake DeMoss held his own and had an impressive debut on the 5k course running 18:44. Starting out the first mile with an impressive 5:25 DeMoss went to work in the hilly second mile passing mile two in 11:43. Holding on to a 6:10 last mile DeMoss was just under 6 minute per mile average passing mile three in 17:59.

"I went out real fast the first mile and it got me in the end," DeMoss said after his race. "A little better pacing at the start and I think I can get my time down." The Girls ran a split team between the early morning varsity race and the Frosh-Soph girls later in the day. The team was led by freshmen duo Mackenzie Thomas and Kayla Nanez who debuted at #20 and #21 all-time for the Warriors running 21:16 and 21:18, respectably. Nicole Favre continues to improve fitness and is rounding into form with an impressive 21:55 showing, a two minute improvement in as many weeks. Brianna Becerra (22:27) and Vanessa Giacalone (22:37) rounded out the scoring team. Team members Kiko Li finished in 23:04 while Maggie Theaker ran her course debut in 24:18.

Hannah Theaker led the way in Frosh-Soph girls race. Theaker medaled with a 17th place finish in 22:18. Ashley Clayton, a middle distance runner at heart, is finding her grove with the longer stuff running a 23:09. Sophia Paterson suffered through heavy cramping start to finish and gutted out a 23:26 showing. Sandhya Bellary rounded out the Frosh-Soph girls.

Posted by Warrior Nation at 4:39 PM