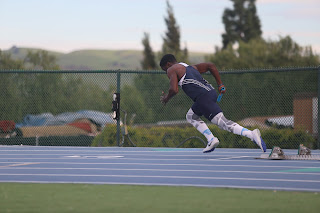 San Jose, CA - Track & Field is officially underway as the season kicked off with a school record and multiple performances landing on Valley Christian all-time list at the season opener Wednesday.

The Backyard Bash Relays is the brainchild of Jason Guven, the cross country and distance coach at Andrew Hill, who about 5 years ago invited nearby schools for a run in Hellyer Park during cross country season. The low key run between neighborhood schools always seemed to end in some strong performances. Carrying that idea into track season the Backyard Bash scrimmage was born. Almost entirely relays the focus of the meet is introducing new athletes to a sport while running non-traditional events such as a co-ed 4 x 800 relay, 800 Sprint Medley and 4 x 200, the environment provided a fun and festive "rust buster" to kick off the season.

Despite the low-key vibe the Warriors had some early season scorchers. The boys 4 x 100 meter relay team of Nick Trofort, Charlie Bostic, Gary Coleman and Alton Julian scorched a 43.58, the sixth fastest time ever in school history. 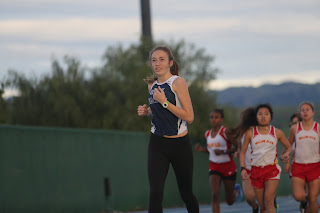 The girls also had some outstanding performances. Nicole Shak completed her first 100 meter hurdle race after taking a fall that resulted in surgery two years ago. Admittedly nervous she went on to finish in a personal best 17.05, the fifth fastest time in school history! Remarkably Caitlyn Rowland finished just 0.01 seconds behind in 17.06, which is #6 on the all-time list.

Posted by Warrior Nation at 4:59 PM