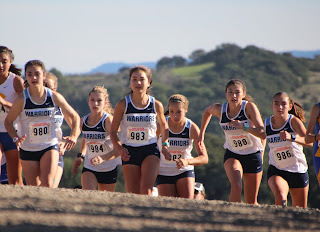 Valley Christian moved into Division II in 2016, statistically the most competitive division in the section. Powered by strong performances from returning members and two outstanding freshman the Lady Warriors ran the tenth fastest team time of the day and their combined mark of 101:09 is #6 all-time in school history.

The last mile is uphill at Crystal Springs and is not kind on warm days or after a fast start. Jordan Hahn powered through the last mile and moved up to 8th to finish in 18:52, an improvement of 24 seconds from the WCAL Championship the week prior. Her time moves her to #5 all-time in team history. 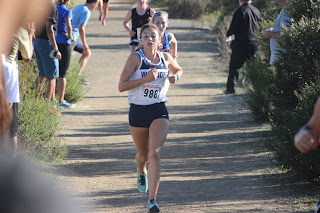 Mackenzie Thomas has been a source of consistency all year and CCS would be no different. One of the team's top runners in school history the sophomore finished just off her best mark running 20:00. Katelyn Stone finished as the team's #3 runner and had a breakthrough race of her own, improving over a minute finishing in 20:09. Her time earns recognition on the team's all-time list.

Sophia Patterson has had a stellar year and is a "poster child" for what hard work can do. In her first cross country race as a freshman she ran the three mile course at Toro Park in 27 minutes. Persistent, she chipped away and got to the 22's by the end of the year.  Then into the 21's as a sophomore. Following a solid summer of running she came into her junior transformed, and has set herself apart as  one of the top runners in school history. The fast early pace and warm conditions took their toll in the last mile but Patterson gritted out a tough race to finish in 20:55.

Hannah Theaker has been battling through a hip injury the later weeks of the season and she gritted out a tough performance that came within seconds of her personal best to finish in 21:11. Camille Reed has been on the comeback trail herself and is running pain free for the first time in two years. CCS was just her fourth race of the season and was still recovering from WCAL the week prior but managed a strong finish of 21:31.

Kayla Nanez has been a key member of the varsity team for the past two years but has been fighting off a cold the past week. Nanez pushed hard to comeback and wrapped up team scoring.

The California State Championship is November 26 at Woodward Park in Fresno.

Posted by Warrior Nation at 1:10 PM