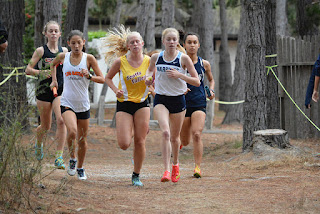 Joe Renati took off from the gun battling many of the top runners in the section on the first leg to hand off in first. His split of 8:00 betters Sean Davis' mark from 2012 by six seconds. A trio of three freshman were next and held their own. Will Luders ran a superb split of 8:49 that was followed by Noah Shinn who split 8:48.

Those two splits held the lead through the first three legs. Next was Ben Kaestner who finished his leg in 9:23, the third fastest freshman mark in team history behind his classmates who handed off to him. Nate Moore had a superb run of his own anchoring the final 1.6 miles in 9:20.

The girls were up next and the varsity girls shot out mixing it up with some of the top teams in the section \ following a stellar run from Christine Albrecht running the first leg in 10:04, a mark that ranks #4 in team history. Alexis McMahon was next and smashed her leg running the 12 fastest split in team history finishing in 10:30. 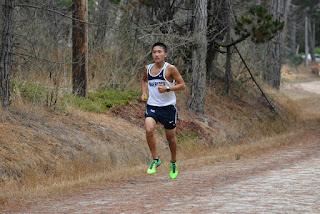 Kayla Nanez has been an awesome contributor the past two seasons running varsity as a freshman and sophomore. Her first sport being soccer she made the tough choice to focus on the later but stepped in to help out the team with two varsity runners not competing on the day. She held her own finishing in 11:38. She handed off to Maylene Aguilar who ran 11:04 earning recognition on the team's all-time list at #20. Sophia Patterson anchored with a run of 10:29 in a competitive finish that saw 6 teams all within 10 seconds with less than 1/2 mile to go in the 8 mile race.

The Warriors will travel to Toro Park in Salinas to compete in the Early Bird Invitational on September 15.

Posted by Warrior Nation at 8:47 PM