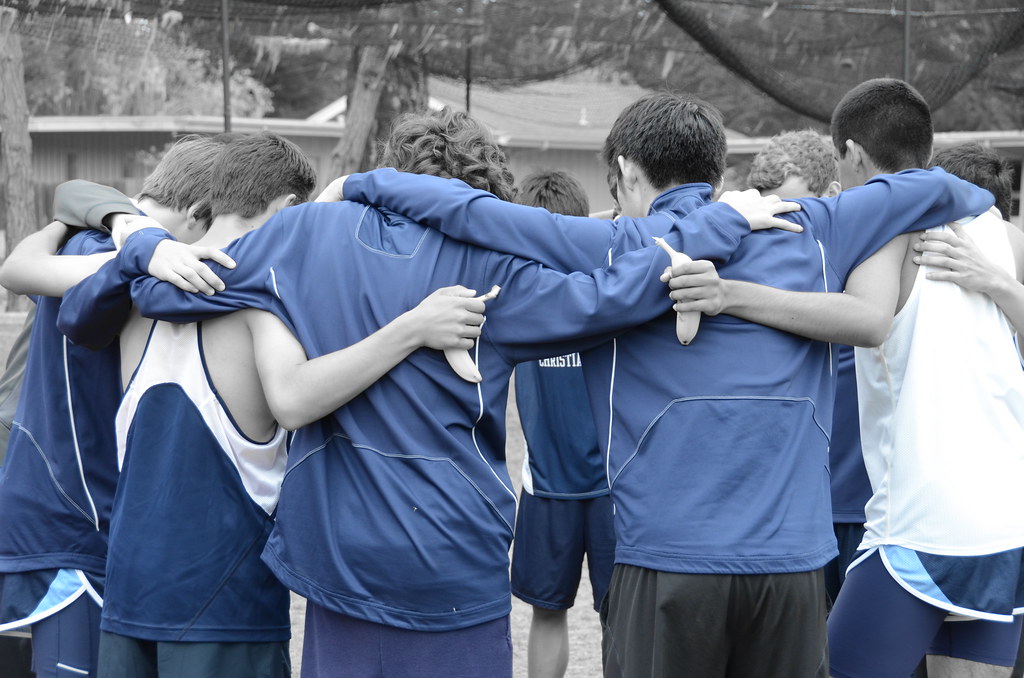 Pebble Beach - The Warriors competed in the RLS Relays Saturday, an exciting cross country race featuring seventeen teams from the Bay Area and Central California.  Teams of five each run 1.6 miles through the foggy coastal forest neighboring Pebble Beach golf course, covering varying terrain that includes technical single track, a long grueling hill and hairpin turns. It doesn't get any more simple: the starting signal is a whistle, results are stickers on a poster board and awards are handed out after teams gather around on the lawn.  It is no doubt true, old school cross country and the simplicity is what makes this event one of the team's favorite every year.

The boys is in the midst of a breakout season as for the third consecutive week a team record fell. Every runner cracked the 9 minute mark as the team went on to shatter the school record by over a minute.  Jason Li started the relay for the second year in a row and ran an impressive opening leg of 8:45, a personal best time.  Passing off to Jeremy Dong, he held his own finishing just shy of his best mark from last season in 8:50, respectably.

The third leg is where things can lag mentally, in the middle of the race it can be easy to drift and lose focus.  Accepting the challenge to be mentally focused in one of the toughest leg Peter Enfantino was magnificent running 8:56 for his split, an improvement of 13 seconds over last year.  Justin Baraona was next up and continued his steady improvement over last season splitting 8:47 which is over a 40 second jump over his race last year as a freshman.  Anchor duties fell on senior and team captain Nathan Lynch. Putting in the work the past two years he has been running determined.  Putting in 60-70 miles per week the past couple years he has led by example and the results have been impressive.  Running 9:09 as a sophomore in his first year running he dropped to 8:38 last year and took another jump this year recording the fastest split of the day for the Warriors finishing in 8:22.

Four of the team's five runners ran personal bests on the day as the the team improved the school record to 43:50, a 64 second drop over the previous mark.  The boys finished fourth in the large school division and sixth over-all.

Just as impressive was the demonstration of the team's depth.  In the sub-varsity race the team of Cameron Lockard, Dean DeMoss, Matt Weeks, Joseph Rentali and Sam Han led the team to a fourth place finish in their division, also in team record time for the sub-varsity division.  The Warriors efforts have not gone unnoticed, they have been climbing the rankings and are currently ranked fifth in CCS for DIII.

Not to be outdone the girls team also had a spectacular day finishing third in the large school division despite missing some key varsity runners taking the ACT.  Kailey Eddy led off with a strong leg 10:27, running one of the slightly longer segments she recorded the fastest split of the day and held her own against some of the top runners in the race looking to take the race out hard.  She handed off to freshman Camille Reed who ran spectacular in her debut splitting 10:26.  Nicole Favre had a huge 40 second improvement over last year's time to finish in 10:33.  Vanessa Giacalone (11:15) and sophomore rookie Lauren Cicisly (11:07) held on to put the the Warriors on the podium for the fourth consecutive year.

Three strong performances, packed together is a good sign for the Warriors team score.  Coupled with the return of Ashley Lara (a three-time state qualifier in cross country and defending WCAL Champion at 800 meters), who will open her season in the coming weeks, the team has hopes for competing for state qualifying spot this fall.


The Girls sub-varsity also had an impressive showing finishing fourth in their division.  Freshman Brianna Becerra and Sophia Patterson led off the first two legs and had had an outstanding race finishing the first leg in 11:07 and 11:40, respectably.  Annie Yeh, Bekah Bruckner and Caitlyn Rowland closed out the run to finish in 62:01.

The team will next compete in the Lowell Invitational, September 20 at Golden Gate Park in San Francisco.

Posted by Warrior Nation at 8:39 AM