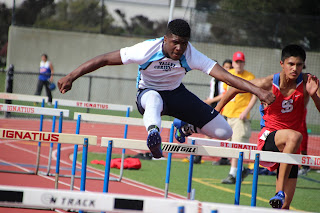 San Francisco - The Warriors traveled to San Francisco Wednesday, a rare day that saw temperatures exceed 90 degrees in The City. While conditions were rough on the distance races the sprints sizzled. By the end of the day ten new additions were added to the team's all-time list.

Charlie Bostic had a stellar day and moves to #10 all-time in the 100 meters running 11.14. He also won the 200 meters, winning his third event of the day. Bostic is currently ranked #5 in both the 100 and 200 meters in the WCAL and is the top sophomore in both events in all of the CCS.

There were multiple additions to the all-time list in the hurdles. Deangelo Mckenzie, a sophomore transfer, competed in his first meet of the season after completing a sit-out period. He moves to #2 all-time in the 110 hurdles after running a personal best 16.05. Mckenzie also competed in the 300 hurdles debuting at #4 all-time for the Warriors running 42.40, also a personal best.

Matt Weeks won that race leading a 1-2 finish for the Warriors. Weeks improved over a second from last season [in the 300 hurdles] to finish in 42.23, which just 0.23 off the school record. Jonathan Sum was stellar as well running a personal best in the 110 hurdles, breaking 17 seconds for the first time with a 16.81 clocking.

Caitlyn Rowland was outstanding in her season debut in the 300 hurdles winning in 48.42, a personal best that is currently #4 all-time. Roland also had a big breakthrough in the 100 meters running 13.34, a personal best my nearly half of a second.

Dylan McCreery jumps to #4 all-time in school history with a two foot personal best hitting 49-1 in the shot put. Also in the field events Matt Weeks hit a personal best in the triple jump of 42-2. His mark ranks #7 all-time.

The Warriors will next compete in the Arcadia and Quicksilver Invitational.