Warriors Look to Contend For State Qualifier in 2015 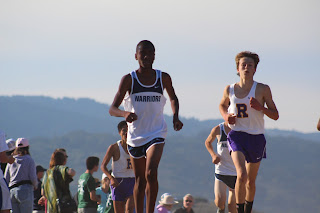 San Jose, CA - The Warriors enter the 2015 season with a chip on their shoulder. Last year was painstakingly close: breaking every team record on every course they ran their number one runner fell ill just two days before the WCAL Championship. The team stepped up, placing six runners 17:45 or better advancing two runners as individuals to the CCS Championship. Another three came within ten seconds of the automatic qualifying time. They finished ranked fourth in the team rankings for D3 but did not advance to the section championship.

Seconds count and last year's disappointment has turned to motivation. Last spring in the track they had eight runners crack the 5 min mile and under 11 min at two miles. The most of any D3 team.

Since moving up to division three in 2007 the Valley Christian boys have yet to qualify for the CCS Championship. Running in the powerhouse conference that is the WCAL, a league that often features top ranked teams in the section and state, it has been difficult for the Warriors to finish in the top 4 earning a qualifying position to CCS.

This group finished 2nd in WCAL in 2012 as freshman and as sophomores running in the varsity division finished sixth. Combined with their track performances last spring some predict them to have a shot at the DIII CCS title. But it is getting to the section meet that may prove the bigger challenge with expected strong teams from Riordan and Sacred Heart Cathedral who also are competing for D3 bid to CCS.

"This team is capable of anything they put their mind to," Coach Small said. "We could win the whole thing, we could not even make it to CCS. If all our guys are all-in and show up healthy to the start line they will be very good."

Nedu Ndili is the top returner from last season. Finishing 18th in the CCS Championship as a sophomore he had a strong showing on the track last spring running 1:59 for 800 meters and 4:32 in the 1600.

Joe Renati finished eleventh in last year's WCAL Championship in the frosh-soph division with a time of 18:46. Renati went on to have an impressive track season running 4:46 in the 1600 and 10:35 in the 3200 as a sophomore. 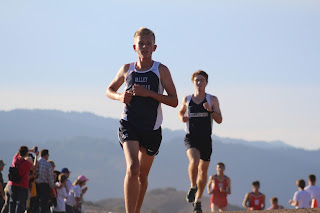 Justin Baraona finished last season running 17:39 in the WCAL Championship, just 4 seconds off the CCS qualifying time. He was one of the top runners on the track in the spring running 4:5 and 10:32 respectively. Cameron Lockard was just two seconds away finishing in 17:37. Playing baseball in the spring he still ran impressive earning a personal best of 10:55 in 3200 at the conclusion of baseball season.

Others expected to be major contributors this fall will be Sam Cuevas.  He didn't run cross country last fall but he did have some awesome performances in track running running 4:56 for the 1600 and 10:31 for 3200. Peter Enfantino ended last season with a personal best 17:01 at the Lowell Invitational and enters the season as one of the top returners. Jeremy Dong looks to be a four time  CCS qualifier, he ran a personal best 17:32 at the WCAL Championship.

Kyle Higdon had a solid freshman year running 18:38 at Crystal Springs and 5:01 and 11:06 on the track this spring. Mitchell Rohr, a sophomore transfer from Tennessee owns a 4:49 personal best for 1600 and looks to challenge for a variety spot. Mathew Weeks ran 17:48 last season also returns.

The Warriors officially open their season at the RLS Invitational on September 12.
Posted by Warrior Nation at 6:07 PM