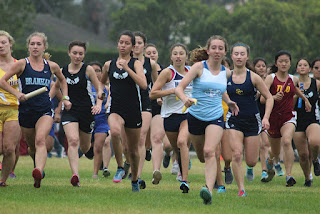 Pebble Beach, CA - Six years ago the Valley Christian Cross Country team traveled to Pebble Beach to compete in the RLS Invitational for the first time. The relay format provided an intriguing challenge. While cross country is dubbed a "team sport" you rarely see any relays. Teams of five race a 1.6 mile course that takes runners around the Robert Louis Stevenson campus through tree rooted trails, sand, and up a long zig zagging fire road. Not a "fast" course by any means it is true cross country.

It was also that initial trek to Monterey Bay six years ago that the team's well known "Banana Baton" was first introduced. Not knowing batons were needed (they aren't actually) a parent suggested using bananas. And a tradition was born.

The boys team of Sam Cuevas, Cameron Lockard, Nedu Ndili and Wesley Deffenbaugh got the job done all running within 7 seconds of one another for split times. Cuevas pulled double duty running the final leg in 8:40. Lockard split 8:46 as Ndili (8:39) and Deffenbaugh (8:40) held their own on the third and fourth legs. The team battled to finish third behind Clovis and Cupertino, both division one programs. 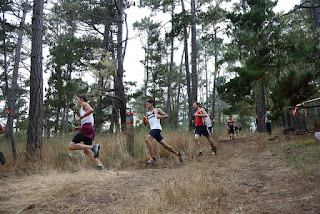 The girls faced off against three of the top teams in Northern California: Clovis, SLV, and Aptos - the defending State Champion in DIII. In a race that is approximately 8 miles long teams are often separated by mere seconds. And this year would be no different.

Mackenzie Thomas got off to a strong start running the fastest split of the day that placed the Warriors in contention from the start. Running the first leg she had some extra distance to cover but her split of 10:10 impressively lands her #4 on the team's all-time list.

The Warriors never looked back. Kaylan Nanez was next up and powered through her 1.6 miles in 10:37. Katelyn Stone (11:00), Sophia Patterson (10:22) and Hannah Theaker (10:27) outdistanced the competition in the later stages to finished third in the large school division and fourth over-all.

The Warriors will next compete September 24th at the Pacific Tiger Invitational at the Elkhorn Golf Course in Stockton, CA.