Pleasanton, CA - It was a split squad for the Warriors season opener; while the sprinters, jumpers and throws competed in Willow Glen, the distance crew traveled to Pleasanton to compete under the lights in the Dan Gabor Distance Festival.

Featuring sixty-three heats of the three distance races what results is competitive heats that has the entire field in contention of the win. Starting off the night in heat one of the 800 Grace Cardona set the table winning her heat with a personal best 3:04. Jordan Johnson also had a strong showing in her debut finishing fourth in her heat running 3:00.

The boys 800 was just as impressive as Yash Patel and Preston Nguyen went 1-2 in the their heat. Patel smashed his personal best by more than 12 seconds. Taking the race out hard he never looked back, opening the first lap in a blazing 62 seconds. He held on to come back in 73 for a 2:15 clocking winning his heat. Nguyen ran a smart race running even splits and sprinted to a runner-up showing, finished his first ever track race in 2:22 respectfully.

The Warriors were represented well in the 3200 meters as well. Starting off the evening, sisters Hannah and Maggie Theaker finished second and third in their race, both in personal best times! Hannah shared the lead through the race finishing second in 13:26 impressively. Maggie moved up throughout the race making a big move with 2 laps to go to finish third in 14:01, a huge personal best! 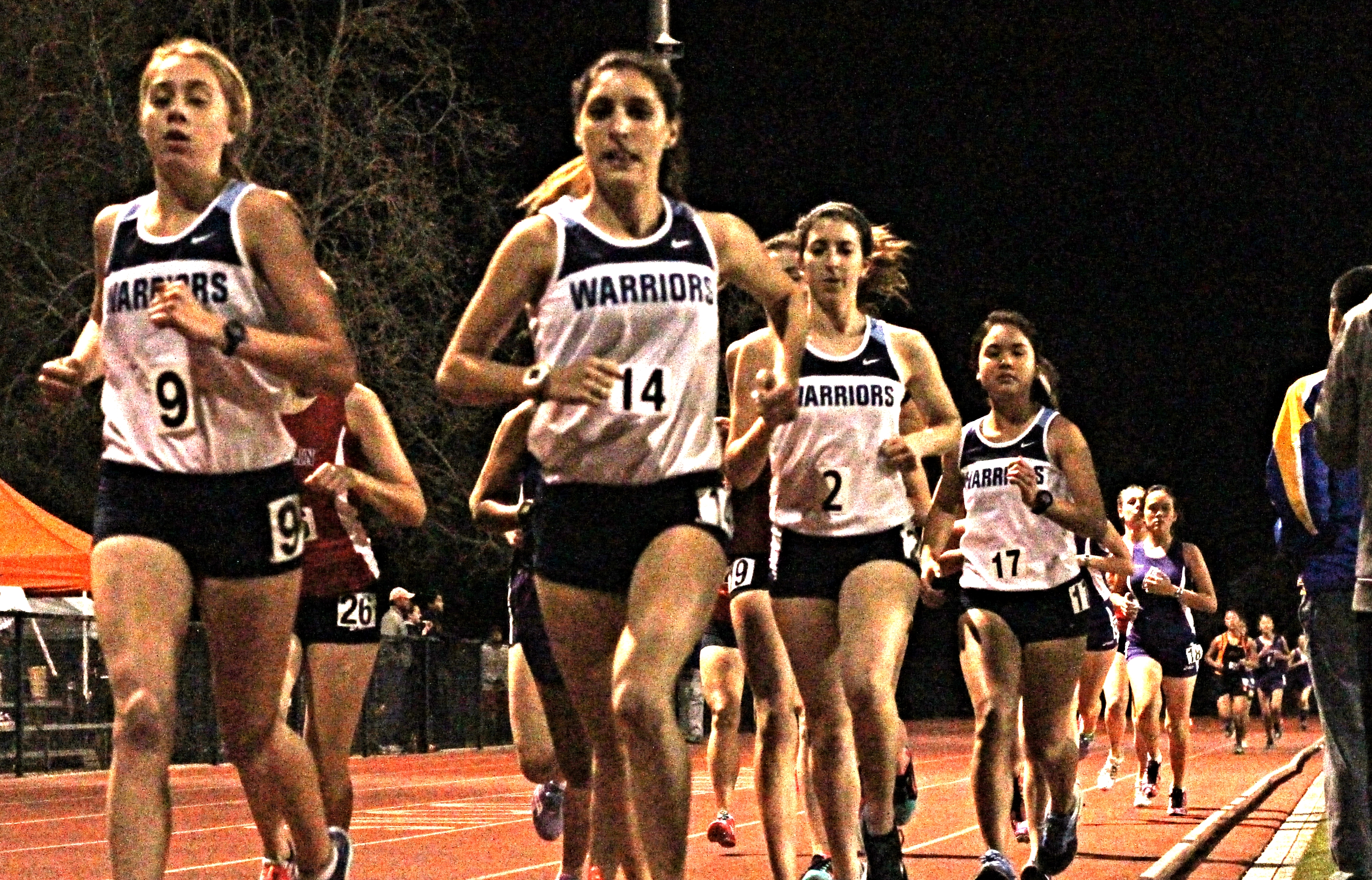 The second heat featured a pack of Warriors that all ran to personal bests. Leading the way was Brianna Becerra in an impressive 12:35. Camille Reed (12:53) and Nicole Favre (12:58) also dipped under the 13 minute mark. Close behind was Vanessa Giacalone and Sophia Patterson in 13:12.

In the boys races all eight entries cracked the 12 minute barrier. Francisco Hererra and Kyle Higdon both were impressive in their debut running with the lead pack and running a big negative split in the last few laps. Hererra finished 11:33, Higdon 11:44. Sam Cuevas (11:17) and Cameron Lockard (11:09) both in personal best times. Justin Baraona knew his pace and stuck to the race plan moving up throughout the race. Running 10:43 Baraona moves to #10 all-time for the Warriors. Peter Enfantino finished in 11:17.

The final heat of the evening had a trio of Warriors gunning for a personal best. Nathan Lynch, Nedui Ndili and Dean DeMoss went through a quick first mile. Lynch and Ndili in 5:06 and DeMoss close behind in 5:15. Lynch held on to finish in a personal best 10:26, Ndili in 10:38. After the strong start DeMoss suffered cramping the last few laps and gutted out a painful 11:04, impressively just seconds off his personal best.

Posted by Warrior Nation at 6:10 PM