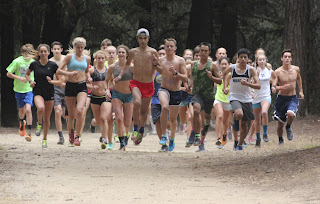 Santa Cruz, CA - The fog from Monterey Bay failed to burn off for the first time in years making for ideal temperatures and fast times on the picturesque course at UCSC. The 2.08 mile course was designed by Santa Cruz High School coach Greg Brock in the 1970's and is the same I ran in high school. The deceptively challenging course is always a fan favorite running through the towering redwoods and varying terrain.

For the eighth consecutive year the Warriors kicked off their season with a team time trial at UCSC. Of those eight years Sean Davis has held the team record for the last five running 11:37 in 2011. Joe Renati took advantage of the conditions and blazed the course in 11:35, bettering the record by 2 seconds. It is also a 27 second improvement over last season.

Renati was followed by Cameron Lockard who finished the #2 man on the day finishing with a 15 second improvement over last year in 12:22. Sam Cuevas was next across the finish line in 12:29, a seven second improvement. Southern California transfer Wes Deffenbaugh was impressive in his course debut, running 12:37, placing him #11 on the team's all-time list.

A pair of strong performances came from those running in their first ever "race." Ben Buckman, a junior who is running for the first time, finished fifth in the team time trial finishing in 13:24. That places him #18 on the all-time list. Top freshman honors go to Jonathan Pappas in a respectable 14:15. 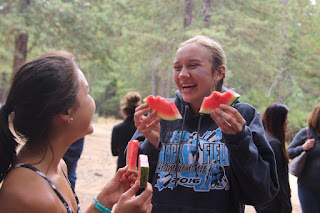 Every athlete that ran the course last year improved, some by minutes! Sophia Patterson was one of those. Not only did she shed over two minutes from her time a year ago but she led the girls team finishing in 14:57, the sixth fastest time in school history.

Another top finish came from sophomore Mackenzie Thomas. Her finish of 15:17 is a 40 second improvement over last season and places her top 10 all-time. Hannah Theaker, a junior, is no stranger to cross country but ran in her first Watermelon Run making the all-time list at #14 finishing in 15:31.

The Warriors welcome another strong freshman class this year. Of the three freshman who opened their season Saturday all earned recognition on the team's all-time list: Katelyn Stone (15:17), Rebecca Rey (15:35) and Alexis Mahon (16:17).

Posted by Warrior Nation at 5:20 PM