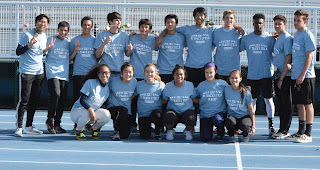 D'Angelo McKenzie came out on top in a photo finish in the boys 110 hurdles. Blake Rose from Mitty & McKenzie are two of the top ranked hurdlers in the section who last year tied at the WCAL Championship. McKenzie got the lean running 15.05 to Rose's 15.08 proving some great races are ahead heading into WCAL and CCS.