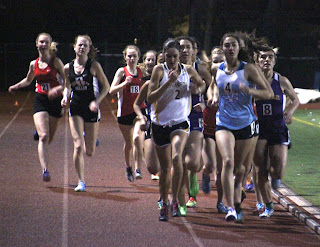 The Track & Field season is officially underway, kicking off the first week with a split squad. Sprinters, throwers and jumpers competed at the Willow Glen Invitational, the distance crew competed in Pleasanton at the Dan Gabor Invitational.

2016 was perhaps the craziest racing conditions I have ever experienced as a coach and right on cue the rain showed up right in time for the start of the races. Increasing intensity as the evening wore on, the worst in the 3200 races.