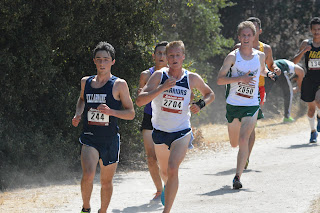 Salinas, CA - Following a year hiatus due to last year’s Soberanes fire in Big Sur, High School cross country has officially returned to Toro Park. This year runners took advantage of favorable conditions and great competition that featured 80 teams and over 3,000 runners from throughout Northern California.

In a unique format divisions are split by grade levels the Warriors saw numerous medalists, additions to the team’s all-time list and personal bests.

The Freshman were first up and started the day strong. Will Luders (17:15) and Noah Shinn (17:18) finished on the podium finishing 3rd and 5th, respectably. Stride for stride much of the way they were separated by mere seconds at the finish. They debut on the team’s all-time list at #6 and #7. Ben Kaestner ran an outstanding run of his own finishing in 22nd with a time of 18:30. His time ranks #21 all-time in school history and #5 all-time for freshman.

In the junior race Nate Moore continues to improve, finishing his race in 18:29, a personal best for the 3 mile distance. His time lands him a spot on the all-time list at #20.

Running the fastest time of the day was Joe Renati who finished 9th in the stacked senior boys race. Returning from hernia surgery last season Renati has been stellar in the early going and has run fearless against some of the top runners in Northern California.

Taking the pace out with the lead pack through 1.5 miles he began to cramp heading into the camel humps just past half way. Battling through the hills and final mile he held on to finish ninth in 16:20. His time ranks #2 all-time in school history. 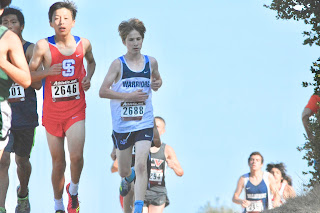 The boys team set a team time record bettering the mark set in 2015, a team that qualified for the State Championship finishing second in CCS for DIII. Collectively running a team time of 87:52, their performance betters the previous record by more than one minute. The boys finished 13th place in the team standings and are ranked #3 ranking in DII.

Christine Albrecht is in her first year of cross country and is loving it. And the team is loving her as she has been outstanding this season debuting at #6 all-time for the Warriors for the Toro Park course. Albrecht finished 4th in a strong field of junior girls running 19:43 for 3 miles.

Sophia Patterson moves to #16 all-time in team history with an outstanding run of 21:08. Her race here four years ago was 26:36 making an astonishing 5:30 improvement from her freshman year. A dedicated student-athlete she has steadily improved and worked to be a pillar to the team.


Maylene Aguilar continues to be on a steady improvement trajectory running 22:39 in the junior girls race. She ran the third fastest time for the Warriors on the day and it marked the first time she ran under 23 minutes. Her previous best was 23:30 at WCAL Finals last year marking nearly a one minute improvement over last season!

The Warriors travel next week to compete in the Pacific Tiger Invitational at Elkhorn Golf Course. Varsity girls start 9 am, varsity boys at 9:30 am. 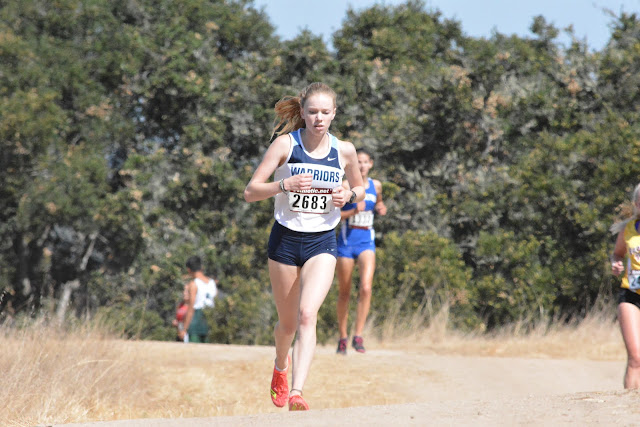 Posted by Warrior Nation at 8:51 PM