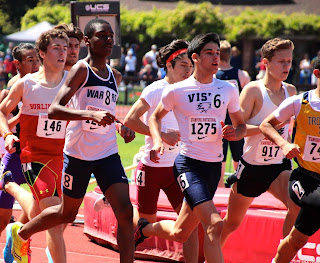 San Jose, CA - The Valley Christian Track & Field team competed at the Texas Relays and Stanford Invitational this weekend. Competing athletes met stringent qualifying standards and faced some of the top athletes from around the nation.

Elena Bruckner traveled to the University of Texas to compete in the Texas Relays, one of the largest and most attended prep meets in the nation. Attendance topped over 40,000 for the three day meet and featured over 7,000 athletes from over 30 states.

The Texas Relays has professional, college and high school competition that is spread out over three days. First up for Bruckner was the girls discus. After a two hour rain delay Bruckner came out with a consistent series of throws, the winner coming from round two with a mark of 171-1. The next day she was back at it, this time for the shot put. Another consistent series, all around the 50-51 range, the national leader again won on her second throw securing her second event win in two days. Her winning throw of 51-1 marks the fourth consecutive week throwing 51+ feet.

Nedu Ndili ran the second fastest time in school history for 800 meters at the Stanford Invitational. His time of 1:57.91 currently ranks him 4th in CCS. 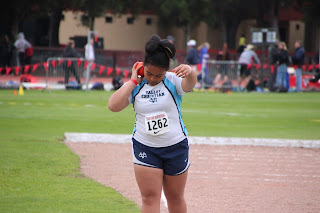 It was a gut wrenching effort but one well worth it. After the race when asked how he felt he responded honestly: "I think I am going to throw up."

From the start Ndili took to the front of the pack pacing the first 200 in a brisk 26.9. The pace slowed as the pack strategically crossing the 400 in 58.7 but put on a big move at the bell. Ndili responded with the top 3, taking the lead with 200 meters to go. The chase was on as Ndili held off the charging pack down the home stretch but was just a half step behind in a three way photo finish. Ndili finished third in his heat in 1:57.91.

For Athiya Iese and Max Moore it was their first big meet experience and the nerves were getting the best of them. For Moore the slick collegate ring was throwing him off. His 142 foot throw was good for 10th.

Iese has been in big meets before, qualifying as a freshman for the CCS Finals, but this felt a little different. Still, Iese qualified for the final in the girls invitational with a throw of 37-7.75.

Boys 4x100 had a strong start but came up short after a dropped baton in the second exchange.

The Warriors continue league competition Wednesday as they travel to San Francisco to face Saint Ignatius.

Posted by Warrior Nation at 7:22 PM